Bridget, Andrew and Malcolm work to expose Charlie who is antsy and wants to dispose of Gemma. Juliet attempts to get intimate with Logan Echolls and Machado makes a breakthrough in the Macawi case. 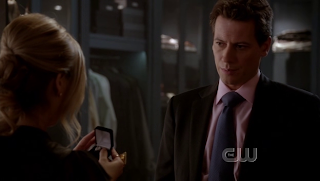 I can't decide if this show is good or not, or fun or not. There are a lot of gaping plot holes and general stupidity but usually it moves along at a good enough clip to hide some of it.First of all, kudos and also sadfaces that they were willing to kill off Gemma for real, especially after the bait and switch. I was half expecting him to miss with the second shot too. How did he not check her the first time he tried to shoot? I knew when they didn't show anything but the gun being fired that she would still be alive, at least for a moment. `Bridget gets irrationally upset, I wonder how much of it was an act. Gemma was after all blackmailing and threatening to expose her.

The show now suffers a serious chick deficiency. Apart from the twins, the only other one in the mix is Juliet, who goes psycho this week, accusing the teahcer of raping her. First of all, this is all very facepalmworthy. Second, her friend who she later tearfully tells all this to saw her very clearly being dressed down for her inappropriate behavior so how can she be trusted? When this gets back to Andrew, he should know better given Juliet's track record yet on the other hand, the teacher did come out suspiciously after the car accident when Juliet called him.

I don't get what's happening with Siobahn at all. Are people really able to fly from France to the New York so damn quickly? I thought all her savings were cut off. What is even her plan? If Gemma is such a good friend of hers, why was she sleeping with her husband and then having her kidnapped? It's all very nonsensical. Regarding Henry, his characterization is somewhat inconsistent. It's all very well for him to play the concerned husband now. He was perfectly willing to ditch her for good a couple of weeks ago.

The Machado stuff was pretty telegraphed. When people intentionally try to trap and kill clean cops or agents in TV shows, it makes me cringe because there's absolutely no mileage in it. It's pretty much one of the stupidest things you can do because it turns up the heat on you tenfold. Hold on now. So this Agent Matador is on Macawi's payroll? So then why did he cut Bridget loose? Wouldn't he have told Macawi? And how in the hell does a gangster from WYOMING have so much damn influence?

I had a reasonable amount of fun watching the episode, but I can't claim it was particularly good. The plotting is very uneven and I don't like where some of this stuff is going, particularly Juliet's storyline. I also think Henry makes a good point about Malcolm; he's basically just some random dude who's parachuted in to the middle of all this. Very out of place.