The group is asked to fill in for the indisposed glee club and one by one, they are sucked into performing. 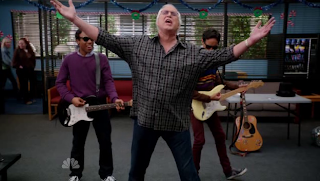 Sometimes this show is so good it's unfair to all the other shows out there. I don't really remember the first musical episode that well but this one was just great - maybe even better than last year's claymation Christmas episode. Sll the songs were appropriately terrible, and there was even an incredibly uncomfortable ship-baiting scene. It's way too bad that it's going on hiatus to make room for 30 Rock - three years ago, the return of 30 Rock would've nbeen welcome news, but Community is the far better programme now. The ideas, writing and performances are superior.

"Community" airs Thursdays on NBC at 8:00pm EST
Posted by jigenzanittou at 03:23