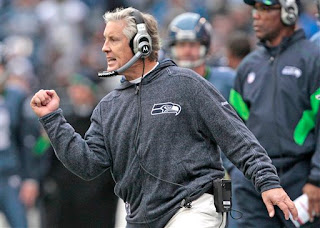 Three-Quarter Point Power Poll
This is a list based on who I think is better, regardless of record - although Bill Parcells did say of course, "You are what your record says you are."

Teams just don't seem so varied lately. Even though San Francisco and Pittsburgh aren't as good as their press clippings may indicate, they're still more solid than almost every other team out there such is the current state of the league.Despite their unbeaten status, I'm not even sure Green Bay is so elite.

These teams are all good and capable of beating anyone in the tier above, but there is a fundamental weakness of spirit hidden deep within that feels like it will fail them at some point. The team that ends up inning the whole thing has often come from the second tier of contenders lately however.

Three of these teams don't have a quarterbackwhich limits their potential. If Chicago can get Cutler back refreshed and healthy, they could tear through the playoffs but I'm not sure any of the others have enough coaching depth to pull one out.

None of these teams are good, they're just kinda there and could make the playoffs because of injuries on other teams and other such scammy circumstances. I really hope the Titans can sneak in ahead of the texans, keping Houston out, because it would be hilarious.

All these teams can win ugly against stronger teams and should be in good shape going forward if they can stay stable and continue to nurture their young talent.

The Redskins would have been much better off if Shanahan hadn't botched the QB situation so badly. All the coaches of these teams had higher expectations and should fear for their jobs.

These teams aren't entertainingly bad, or historically terrible, they're just bad and awful to watch.

These teams are entertainingly bad because they're so horrible. Maybe not so much the Jaguars though who just got their coach fired. Funny how Gene Smith got extended at the same time. I feel like I called that.

I couldn't believe this line. Do people still think the Eagles are good? Get over it already! The Seahawks faltered agains the Redskins but they had control of that game and blew it rather than the Redskins showing particular excellence. The Bills ahve lost four straight and are in free fall - looks liek red meat for the Titans to trample over. 7 is too big a spread for Caleb Hanie to cover. The Chiefs aren't good but they play reasonably hard and should be able to stay within check. The Raiders are rolling. The Dolphins are a lot better than their record, but Oakland will be too strong.

I don't like taking the favorite in a ridiculous spread this high but the Colts have quit on the season. I was thinking backdoor touchdown, but then again it is Dan Orlovsky so maybe not. The Bengals are almost as good as the Steelers and the spread is way too high, no doubt influenced by Steeler homers. The Buccs do well at home and should be able to KO a not so special Panthers team. With no Adrian Peterson, the Vikings have few options for combating the Broncos and their strong defense. Tebow keeps it clean and the Vikes won't see the ball.

The Jets are getting into the time of year where they come good. They should be able to handle the Redskins unless Sanchez loses it for them again. The Texans are down to TJ Yeats at QB. They can run the ball fine but they also have that Clemson/OK State factor. It may not have worked out for me yesterday, but I still won't believe it till I see it. The Ravens have played down to their competition and the Browns are all the way down there but I'm still morally opposed to picking Cleveland so we won't do that. I'm a sucker for continuing to pick the Giants, but they're not that much worse than the Packers, as a home dog especially.

The Rams away from home? That's gonna be a slaughterhouse especially if Bradford is out again. The Cowboys aren't impressive and always have trouble with the Cardinals who seem to pick and choose which opponents they'll play tough against.The Lions always crap the ebd against superior teams and this looks like a blowout. The Jags meanwhile tend to play well in primetime and they have that new coach bump too. With San Diego on a long losing streak going cross country, I see Jacksonville coming out on top.