Carter is quizzed about her interaction with Reese who is chasing down multiple numbers. When he hits trouble, she has a serious decision to make. 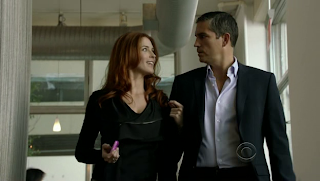 Wow, what a mess. The main story was ridiculous and convoluted and with the exception of the cute redhead, exceptionally poorly acted. There was all this intrigue with political figures and so on but ultimately nothing came out of any of it as it softly petered out. Unnecessarily complex, I would call it and much like the episode with the German spies, everything went down a little too conveniently.

There were some bright spots, Carter's decision-making process was interesting and an inevitable shift for her character to make. The CIA guys showing up and claiming Reese killed his ex-partner was also intriguing - there's obviously more to that story than meets the eye. But am I supposed to believe that Reese who lugs around snipers and grenade launchers went into a potential shootout with kidnapping goons with no body armor? On one level he seems fatalistic, but the more likely explanation is bad writing.

This show wants to be more than a simple procedural but has stumbled when it has tried to break out from formula. It's certainly a disappointment as it had a lot of promise and will have to be closely monitored to see if it makes progress. As a mid-season finale though, I was not encouraged by what I saw and felt rather turned off in fact.

"Person of Interest" airs Thursdays on CBS at 9:00pm EST
Posted by jigenzanittou at 15:26