The McKinley High Class President title vote draws to a head. Santana is forced to confront her demons. Puck makes progress with Shelby. 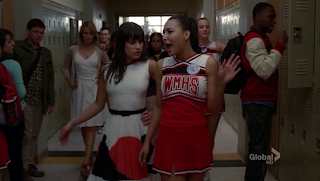 Good God, this show is terrible. I don't mean it's mundane the way Dexter is, I mean it's actually terrible, one of the best examples of why network TV is so lowly regarded these days. I don't even feel like recapping it anymore, it's so bad. We'll see how it goes from here on out with it. At this point, I've made peace with the fact that the creator is going to shove his agenda, yes, his agenda in our faces relentlessly. But he does it so artlessly, without regard for arc, or three-dimesional characters. This is how I want the world to be, it's like he's yelling, and if you don't agree, you're a meanie!

There's probably a lot to talk about but I don't feel inspired by any of it. Santana is a better character than Kurt, but all of her problems we've kinda seen before in the same show, not just with Kurt but sort of what happened to Quinn as well. It's not interesting and neither is Brittany, her supposed girlfriend. Speaking of Brittany, the election thing was so dumb. Rachel's actions were extraordinarily stupid and selfish and at this point, I don't care about her and I feel no sympathy for her or the plight she leaves the club in. Kurt's ambitions notwithstanding, what made him a better candidate than Brittany or the hockey player anyway? Selfish, selfish, badly written, a school with only ten or so students apparently.

Now, the tone of the shows are different and the characters are also not that similar, but when I see how Ringer handles the thread of a student infatuated with a teacher compared to this show, it really bothers me. If we think back even just to season one of this show, where it was Rachel in love with Schuester, it was totally inappropriate and very unethical, I don't care if there's a daughter involved. Another bad storyline. At least they finally acknowledged how screwed up Quinn is. Hopefully she can get some help and that can be a main story thread instead of the stupid irrelevant crap currently on the table. What happened with Mike? Token Asianism strikes again.

"Glee" airs Tuesdays on Fox at 8pm EST.
Posted by jigenzanittou at 00:20