The team treats a prosecutor who hides an arsenal of weaponry in his house. Wilson goes on a hunt for House's own concealed firearms. Park fears she is not respected. Taub interferes in Foreman's business. 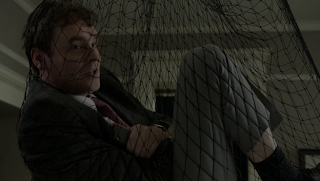 I had to double check to ensure he wasn't referring to something else, but I'm fairly sure House namechecked the Pokémon Arceus at the start of the episode. I'll say this, it's no less believable than some of the other creator myths out there. Meanwhile, I'm thinking shows should have term limits. It's not that this was an especially episode, it's just, as I mention frequently inr egards to House, the whole affair seems rather tired and long in the tooth.

I spoke of Dexter becoming a self-parody, that's what I feel is going on here too. I really don't have much to say about this episode, it wasn't so terrible watching it but now sitting here thinking about it, it has really stewed my displeasure. The House/Wilson storyline was funny but so, so juvenile. It's the kind of thing built for season 3 or 5, surely we've come past that now. I also feel like we saw the Taub and Foreman nonsense a year ago when Taub was bunking at his place. What's with Taub interfering? Doesn't he have enough problems of his own? Foreman has long thrown himself into his work rather than develop relationships outside of the medical profession. His daliance with the married woman is clumsily handled, befitting his lack of recent experience with normal human interaction.

Park fears she's not liked or respected and I would say she's not being paranoid; she's annoying! She boxes Chase into a corner and coerces him into accepting a 'date' with her. Adams is clearly put out by that, I fancy she has her eye on him herself. I'm not sure what the part of Park is supposed to accomplish. The characterization has been uneven, possibly some of the fault lies with the actress. She notably has an overbearing Asian father, where have I seen that before? She was evidently written to be subversive, but you can't be that if you don't actually subvert anything. A few pointed comments from House won't cut it. The more I think on it, the more this episode annoyed me. I hope this is the final season; this show used to be so good, but they've run out of places for it to go.

"House" airs Mondays on Fox at 9pm EST.
Posted by jigenzanittou at 00:38