After receiving (de)constructive criticism on the cupcakes, Caroline enrols herself and Max in a pastry decoration class. 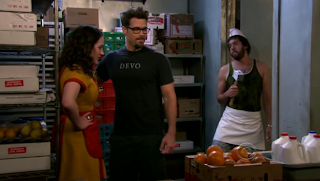 The Firm
The cupcakes get praise from some trendy hipster yuppies slummin' it in the cafe who direct Caroline and Max to a rich person café to pitch their wares too, but without even a taste test, they're dismissed as the presentation is bare essential plain and simple. Max retreats into her shell and in a huff, refuses to bake any for the next night, prompting me to note, "That's why she's Clemson". She comes up with her usual array of excuses (it would be 'selling out') and deflective jokes ("My cupcakes compensate by having a great sense of humor!") but none of it is particularly convincing.

As is often the case, Caroline once again has to provide the impetus, enrolling the two in a cake decorating class led by a pair of Jersey Shore rejects who Caroline hypothesizes are mobbed up, reminiscent as they are of Gracie Ancelotti. Max and Caroline fail to toe the line set by the guidettes but they do get creative and in the process come up with a hook that wills et them apart - Cupcakes that insult the eater! One of the gay couples also enrolled in the class approves the idea, if they had them at their wedding they would be able to "really let those bitches have it". Despite being down in the cash column this week, long-term things are looking up.

Inappropriate Sexual Tension
Max accuses Caroline of various things and as per usual, Caroline is very patient with the caustic wit of her friend. She is accused of decorating her Murphy bed like a giant vagina and being desperate for some action, but it seems more as though Max is projecting her own desires. Max again accuses Caroline of only dating white guys, to which she responds that she once dated a Spaniard - they are of course, in fact, white guys.

Max's crush Johnny brings his Puerto Rican friend to the diner hoping to matchmake between he and Caroline, but there are far more sparks between himself and Max who get a little nervous in the walk-in freezer before Oleg interupts them. If Caroline wants to prove Max wrong, she should date a Japanese guy - she sure enjoys quoting lines of their language. Despite what Max claims, it really does seem as though she is more focussed on the business.

Everyone hates Brighton Beach
Why are all the customers at the diner so awful? Actually, I know the answer to that - it's because all customers everywhere are awful. The old ladies Max serves at the start of the episode appear to be fans of the View, or so I would imagine. The co-workers are uninspiring as usual, barely rising above tired cliché. I feel most sorry for Matthew Moy - his accent isn't even remotely close to what a real immigrant Chinese actually sounds like.

In conclusion
The pacing of this show is really offbeat, scenes flow by really quickly and it feels like we're still in the middle of the episode by the time it's about to end. It continues to be good untaxing fun, and I think it will work as long as they don't throw too many characters into the mix beyond our two girls.