The local hero of a town is hospitalized and he decides now would be a good time to confess his numerous misdeeds. Taub and Chase return to the hospital, and Taub has two baby girls with him. 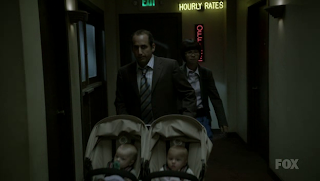 Better late than never, though their returns throw up more questions than anything else. Taub returns with two children in tow, from different mothers, neither of whom show up in this episode, the logistics of which are mind-boggling. Presumably he's currently with neither if he was only with the kids for the week. House tries to provoke him into seeking the paternity of the children to confirm whether or not they are both truly his, a notion he initially resists but eventually cannot resist, the natural curiosity which lead him away from rhinoplasty to diagnostics overriding his paternal instincts.

When House thwarts him from receiving the results, and then taunts him waving the file in his face, something seems to switch in him. No doubt the main tale at play influenced him a great deal - the difference between the belief of the wife in the patient when she thought he and had not had an affair was stark. Perhaps also reminded of House's dysfunctions, he embraces his new role in life unquestioningly, shredding the results. I was half expecting it to be the wrong file.

Chase supposedly spent the year surfing and out of medicine, to whit I have horrible flashbacks of the 'lost' episode of Lost where Jack was hangin' out on in Phuket. Foreman notes that Chase's medical skills are still sharp, indeed he is the one who goes the extra inch, pushes in the right place and solves the case. In the past, it seemed that Foreman was the one who would be the next House, but stripped of everything he loved and finding perhaps that the easy life was never really for him, content as he has been to skate on natural talent for a long time, perhaps he will be the one to develop into that damaged genius.

Certainly Foreman is heading in the other direction. Already falling for House's tricks and games far too easily considering he was inside, he is accused of selling out by taking the top job and doesn't really have a good come back. It was implied that Cuddy was once a highly skilled physician and we already know that Foreman is. While she allowed her ability to atrophy, I think that Foreman will want to be a little more active.

Decent episode, though it was really gross when the guys skin started peeling off. Will these guys ever get a diagnosis right on the first try? Will Chase and Adams really get together? House is right, they already make a natural couple, though Chase has that effect on a lot of women. I suspect Wilson may feel like punching House again with the modification to his office wall. Were their offices always next to each other or has that been retconned for convenience? i suspect the latter.

"House" airs Mondays on Fox at 9pm EST.
Posted by jigenzanittou at 14:37