Barney and Robin debate over whether to admit their misdeeds to their respective partners. Ted, Marshall and Lily attend a concert but Ted encourages Marshall to engage in some preparatory illicit behavior. 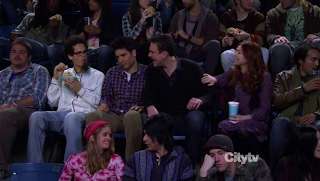 My routine and internal clock has been messed up the last week, I'll keep this one brief because this episode was really not good. I love the sandwich euphemism, but when you keep bringing it out again and again and again, it kinda loses its impact. The conclusion of the Marshall and Ted Go Searching For Nachos story was pretty funny but everything that led up to it was a bit tiresome, shaggy-dog story-esque. The only thing really that I took from it is Ted's crushing sadness that he is not the one preparing to be a father.

As for the other side of it, I thought for sure that Barney would have a harder time dumping Noora than Robin would dumping Kevin, partly because it took so much work to get Noora. Robin's refusal perhaps indicates a lack of belief in Barney's ability to maintain good boyfriend efficiency, especially given he dumped Noora while her parents were in the kitchen, although Robin didn't know that at the time. Ted sees Barney clearing rose petals from Robin's bed when he returns home.

Earlier in the season, Kevin and narratorTed note that the Ted-Barney-Robin dynamic will fail horribly at some point, this presumably is the start of it. Will Ted support his friend in his pursuit or will feelings of his own be stirred up again? As much as Barney claims she is the love of his life, she was also the love of Ted's life. There's still like a 1% chance that Barney and robin don't end up together which I'm clinging to. Until then, failing grade for this terribly misguided thread.