On the eve of the West Side Story premiere, Artie criticizes Rachel and Blaine for being virgins, claiming their performances are lacking as a result. Coach Beiste also has a crush on someone but can't bring herself to accept love. 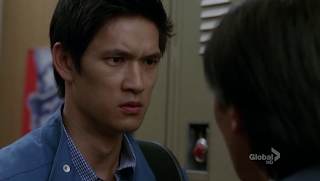 I hard a time figuring out what the message was meant to be in this episode. I meanm it seemed fairly obvious, but that couldn't really be it, right? This show is often broad and crass but I feel confident it wasn't about eroding the social morals of the viewing audience. For Coach Beiste, its fair to say that without ever having made love, she would feel incomplete as a person amd that's true of all adults who lead a normal life. The other first timers though, really they are still children.

Finn started the episode hoping that the Ohio State recruiter was coming to watch him, but ended up having his dreams crushed. But Quinn saw this coming a year ago. The life she had planned out for him and her saw him in a realistic blue collar job befitting his abilities, an adult vision if ever there was one. Since splitting, both have gone backwards and retreated into fantasies, Qunn with her half-baked plan to win back custody of her child, the unfocussed Finn still unable to find his place in the world.

For Rachel, her aggressive pursuit of her life goals in the performing arts have helped to shield her from the realities of personal relationships. She feels obligated to take the next step with Finn but nothing about the procedure feels natural - until Finn has his moment of doubt and faith. Prior, she had always been very concerned about her own self, as evidenced by her urging of him to vote for her, but Finn's breakdown reminds her that she is in a partnership with him - it takes two to seal the deal and as much as she wants him to support her, she has to support him too and some could even say she took advantage of him, though usually in modern narrative, that kind of thing is only talked about in one direction.

What's with Artie in this episode? Glee's lack of focus on the lesser characters makes his kind of behavior all the more jarring as the adjustment is less gradual. He puts on a show, overcompensating for his lack of working legs by delivering critique and orders towards everyone involved in the musical, including a rather shocking and never would ever happen in a real setting dressing down of the Coach. His pre-curtain nerves are a good sign - whether or not the play went off successfully, and this is TV so of course it did well, he can see room for improvement in himself.

Along with Brittany, Kurt is my least favorite character in the show and this episode really did nothing to change my opinion. There's a reason he had a lot of problem with bullying but Blaine has never been seen to have the same issues, and it's not just because Blaine only recently joined the school. Blaine and his admirer Sebastian just act like normal guys. As part of the Conrad Murray trial, they were laying cuts of Michael Jackson speaking with his real voice under the influence of heavy drugs - the high-pitch thing was all a put-on. That's how I feel about Kurt. Everything about the character is fake. Offense intended towards Chris Colfer because I'm 100% sure that's not how Ryan Murphy wants to portray him.

Random thoughts - Vegans are impossible to cook for. I'm glad Rachel inadvertently ate meat. I may have mentioned this before, but it annoys me that there's no one in the school except for the Glee club. Why couldn't someone not in have played a lead role in the play? I guess it's just a limitation of the format. Mike pretty much had his one random scene with nothing happening before or after to justify it. I'm not sure I like where that whole thing is going but Tina's story about their time together was pretty cool. I wasn't so enamored with this episode otherwise. They try too hard and it doesn't always work.

"Glee" airs Tuesdays on Fox at 8pm EST.
Posted by jigenzanittou at 02:08