Malcolm begins to suspect something is not quite right about Charlie, and feels that Bridget is getting far too comfortable in her new life. Bridget visits Siobahn's therapist and is disturbed by her findings. Meanwhile, Andrew's business partner Olivia is eager to talk to Henry after he reveals his wealthy father-in-law is in very poor health. 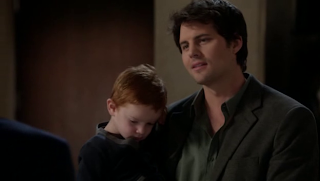 Holy crap, the kids are real! Not only that, they're twins and ginger! Presumably, they got their hair color from their mother but every picture I've seen of Tara Summers outside of this show, she's blonde. Is red her natural color, or just a curious storytelling choice? Looks like we may actually get to find out, because as it turns out, Gemma is not dead! She's just locked up in Charlie's John's basement. Malcolm does some sleuthing and finds the real apartment of Bridget's new friend but is unable to work his way into the basement before his time runs out and poor Gemma is left down there for now.

Ok, so Charlie goes in there to visit her when this revealed and talks to her like it's the first time he approached her in a civil manner. She's been missing a few weeks now, what had she been doing for food, water and pee and poop beforehand? Logistically, it's a nightmare. My recommendation for people is: never kidnap anyone! Should we call him Charlie or John? We may have covered this before, but did Malcolm do before getting kidnapped himself? His mind works like Colombo, and he knows far too much about breaking and entering. Did he use to work for House?

John/Charlie paid off the Edward Mars lookalike to help Bridget escape from FBI surveillance and make her way over to Siobahn. There are so many damn problems with this, mainly that the agent claims that "half the bureau is on Macawi's payroll". Somehow, Bridget buys this. Honey, he's a gangster who resides in WYOMING! He's hardly Vincent Gigante. He's not even Avon Barksdale. Now what in the hell is Siobahn plotting? I don't get it. It's meant to be a big problem that Bridget is still alive. So just disappear her! You disappeared Gemma, why can't you get rid of Bridget? none of it makes sense. Too tricksy for its own good.

Malcolm worries that Bridget is too comfortable in Siobahn's life, but why not? She takes particular glee in seeing the jealousy on Olivia's (Jaime Murray) face whenever she is around Andrew. That is a new thorn in the side though as the scheming typecast Brit does some snooping and is starting to sniff out that Siobahn and Henry fooled around, speaking of which, why do people keep leaving their phones lying around? Also, why does he have a picture of himself and Siobahn on his phone just mixed in there with pictures of his kids and all that? Sloppy, and very convenient plot-wise.

The action kept up at a good pace in this one, but the plot holes were frequent and unmistakable. I was plenty entertained, but there was too much to criticize as well, so no high grade here even though i was really excited to see Henry's kids.