After awkwardness ensues between Max and Johnny, herself and Caroline find themselves catering cupcakes at an event organized by his girlfriend Cassandra. 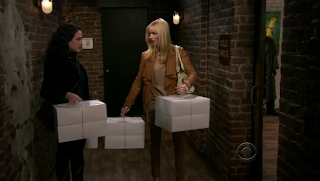 Really good episode, maybe the best of the bunch so far. You get the sense that Kat Dennings and Beth Behrs are really secure in their roles now and know exactly how to play them and off one another. We don't have to waste any time worrying about other characters so the action just follow the two girls all day all the time and they really shine. The show has its flaws and all too familiar character archetypes but an award for best new comedy would be much deserved. Everything else out there plays it too safe.

I can't really say much more about it, it's not a cerebral show, it's more one that has to be seen to be appreciated. One-liners zing, scenarios spark. I was unsure about the show when it first started and I'm still not enamored by the supporting cast but it is a legitimately good programme. I noted that there's another chef working in the kitchen, appeared to be an older guy, I wonder where he has been hiding.