The case of a aspiring teenage circus clown who takes inspiration from his dead father has particular significance for Taub whose ex-wife is planning to move to Oregon with one of his daughters. Meanwhile, Wilson scores ringside tickets to a boxing match but is unable to take House due to the terms of his parole. 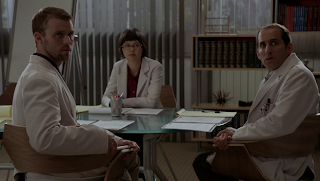 Not gonna drag this one out too long because I am in a bad frame of mind right now. this episode again heavily featured Taub and we get to see what has happened to each of the women he knocked up last year. Ex-wife Rachel is still with her new boyfriend who would quite like to move to Portland with her and Taub's daughter Sophia Sophie. Taub intends to stop them and retain a bond with his daughter but when relating his problem to the rest of the team their response ranges from disinterest to outright calling him selfish. House, as is his way, sets out to prove definitively that a months-old baby wouldn't know the difference.

Of course, however, the patient this week conveniently has a similar daddy iossue; his father apparently when he was very young and though he doesn't remember him, there are certain details of his life that have stuck around and inspired the youth to pursue a certain goal in honor of those faint memories. It all turns out to be a big lie though - the boy's father is not dead, he sexually molested the patient when he was a toddler and was kicked out forever by the mother.

Taub had been hanging his hat on the kid retaining that connection to his father as proof his role in Sophie's life will matter - but when it's all exposed as a fraud, rather than weakening his resolve, it makes him more determined that rather than just some ghost of a vision, he really will make a difference. Personally, i think it is patently unfair for a woman to want to move a young child far away from the father if that father has expressed a willing desire to be involved in the child's life.  It's selfish, and speaks to a lack of responsibility on the part of the mother, feminism be damned.

Miscellaneous notes time; The other ex of Taub's, Ruby, had quit her job at the hospital and moved home with her parents, but Taub urges her to move into his guest room to give her more freedom and him more access to his other daughter, also named Sophie. I'm sure it will end in smooches. The con pulled off by Foreman and House on poor Wilson was pretty telegraphed - as soon as Foreman called Wilson into his office I knew something was definitely up. Foreman has had his moments but it seems like this was about trying to buddy up with his underlings. Misguided.

House also presses and presses and forces a confession out of Adams about how her parents did or did not screw her up in her teenage years - (it was more about rebelling against boring white suburbia) - I found it a little tiresome. That's the problem with having to rush a new cast member in, they have intricate backstories that have to be released by use of antiquated overused methods. It's a sign the show has probably gone on too long. Also, for once could they make a correct diagnosis, damnit?

"House" airs Mondays on Fox at 9pm EST.
Posted by jigenzanittou at 23:30