When Chuck appears to have turned a new leaf, Blair sets out to expose his true self. Nate feels pushed away by Diana and seeks solace in Charlie, but she has problems of her own after the reappearance of her ex-boyfriend who knows of her true identity. 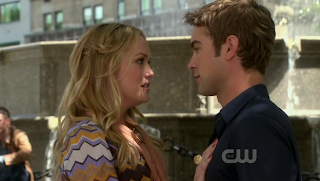 I think sometimes this show gets too tricksy for its own good. When you twist and turn and fool around as much as they do in this episode, giant gaping holes in logic begin to appear. I know everyone on the UES is very much into their skulduggery but TV ain't rocket science. Often, just keeping it simple works too.

The feud between Diana and Charlie deepens this week and it's entirely Diana's fault. It seems her obsession with Nate is rooted in some sort of dark servitude to his grandfather, the infamous Van der Bilt senior who is plotting something big for Nate. It's very unclear why part of the plan includes him sleeping with Diana, she's not exactly the type of woman who'll be bearing the next generation of old money. In fact, a better match would be fresh-faced socialite Charlie Rhodes whom Nate pursues aggressively after getting a temporary brush-off from Diana. Nate as usual is sent flailing about like a puppet without even realizing it as his personal cougar puts into place a horribly convoluted plan.

Max, Charlie/Ivy's ex-boyfriend from Miami and LA conveniently shows up, supposedly having tracked down IVY to the Spectator. How he did this remains a total mystery but he very coincidentally bumps into Serena  who, looking for bloggable material, strings the poor lad along into meeting with Diana who invents her aforementioned convoluted ploy which involves a mask party replete with performance art. i had no idea what the crap was going on during any of it to be honest but there were a few notable things.

The idea of a mask party was of course originally floated in the first season, the classic episode where Blair throws a party setting puzzles for Nate to come find her and give her a kiss, except he is looking for Serena and ends up kissing a different waifish blonde, Jenny. That pretty much is replicated here with Diana sending Max into the maze searching for Serena only to find Ivy. Serena has a good six inches or so on Ivy, so how one could possibly confuse the two is just as confounding as how Nate mistook Jenny for Serena all those years ago - are they secretly brothers!?!? Probably not, but despite it being a total crackpot plan, it somehow all works out perfectly.

Serena is left stood up and angry, while Ivy is left in a fluster which is mistook by all around her to be Crazy cousin Charlie off her meds. This turns out to be the motivation Serena needs to blog her butt off and rival Gossip Girl, but Diana has fired Ivy, presuming Max will reveal her secret anyway. Or has she? I have no idea what happened. Ivy, as Charlie, later claims she quit. It seems unnecessarily stupid and harsh for Diana to do that and not protect her by removing Max from the equation. With all these variables flying around, does she not suspect someone may spill the beans about her own manipulative self? None of it makes any sense.

The party was thrown by Chuck who is back to the honest do-gooder ways he seemed to have adopted with Eva on his arm, except having replaced her with the stray dog Dan gave him. I contend that he is healthier for not being around an unstable person like Blair. She goes to bait him into revealing his true self, and he seems to show that by kissing her forcefully, 'proving her right', but it turns out to have been a backdoor deal struck between him and Dorota to erase doubts from Blair's mind. A couple of things about this. Blair goes up to him, playfully baiting him in a sexual manner, for two people who have the history they do, it was very natural to get the response she did. I don't see how it proved anything to her, other than that she is totally insane. The other is that Dorota apparently walks around the city in her maid uniform when escorting Blair. Seriously?

Last and least, in a developing story, Dan is apparently so bummed about falling out with Serena and the slumping sales of his book that he has taken to hiding in the loft while pretending to be on a book tour. Alessandra Steele calls Rufus to ask him where Dan is so he finds him once. It seems that rather than resuming his tour, he stays in the loft. Doesn't he think she'll call his dad again? there seems to be a lack of brains on many characters parts this week.

Mixed bag this week. I liked the Charlie-Nate-Max-Serena stuff but disliked the way Diana inserted herself into everything. Liz Hurley is back to grating on me. Ed Westwick as Chuck is always good but Blair's irrationality was off-key. It would be key to see how this Max thing will play out - will he go along with Ivy's story? I presume yes, but will it be because he will acquiesce to her demands or fall for more of her lies? It'll be good to have some poor people back around for once regardless.

"Gossip Girl" airs Mondays on the CW at 8:00pm EST

I'm thinking that may be unnecessarily generous but I'm too lazy to change it now.
Posted by jigenzanittou at 23:27