Chris is desperate for some down time so he and Reagan attempt to find a regular babysitter. Reagan has problems of her own at work where she is accused of having lost her cutting edge. 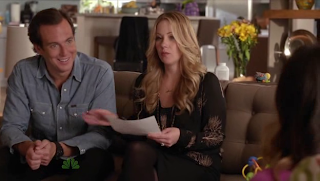 Fairly good episode, I enjoyed most of it. I know I've seen this Nancy rolling around in sitcoms before, but I can't quite place her right now. Chris's paranoia about Amy not having the connection with him she seems to with her mother and other females is pretty cute. Ava's role was limited enough to allow her to be crazy and amusing without ruining the rest of the episode. Poor Missy gets dumped on a lot. Her outbursts in this episode should lead to people treating her better and being more appreciative of the effort she puts in but probably won't. So pretty much right after Reagan sends Nancy away to arrange transport for a show guest, she instead off in the play area fooling about with Amy. No wonder she was cruisin' for a... firin'. if she is the full-time nanny will she be a recurring character a la Missy or less frequent? My thoughts aren't particularly focused, but this was probably the most solid and original episode yet so good for them. It's not as dynamic a show as 2 Broke Girls but should work very well for an older demographic.