Marshall and Lily reconsider their decision to stay in the heart of the city. Ted and Barney, depressed over lost loves, concoct a crazy scheme. 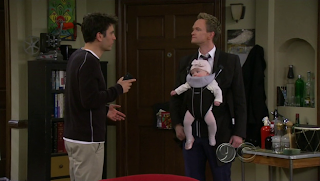 I think I'll make these all shorter cause I am pretty squeezed for time now...I asked Chris this earlier - how come chicks on TV who have a short-lived affair or one night stand always end up pregnant? Robin is, presumably it's Barney's and TV doesn't do abortions so it'll be kept and will probably be the reason they end up together, like Rachel and Ross on Friends. It's a little neauseating to a show that was once as good as this was to resort to such a cheap trick. They could try and be counter-cultural and have it be the reason they drift further apart but that's clutching at straws, I suspect.

Marshall and Lily are making the right choice - If they have that space available to them, use it! Robin tries to scare them with tales of how everything is less accessible on Long Island, but they're never gonna get out anyway with a baby taking up all their time. The apartment shrinkage was pretty funny - because it's true! Everything seems smaller and less significant when you get a taste of what could be.

Ted is getting disappoitingly sidelined lately, he needs some new story fast - isn't the show meant to be about him? Looks like we're gonna have to live with this Robin-Barney crap throughout the rest of the run of the show. Might be a good time to duck out on it. Decent episode otherwise.