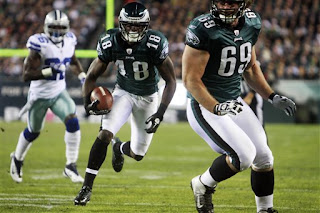 Half Point Power Poll
This is a list based on who I think is better, regardless of record - although Bill Parcells did say of course, "You are what your record says you are."

Right now, unfortunately, we are headed for a repeat of last year's Super Bowl, a match-up of two of the most loathsome yet media beloved teams in the league. Neither is playing as well as you suspect they could if they shifted up a gear, but yet they win, the mark of champions as they say. On the other hand, you get the feeling the 49ers are playing as well as they possibly could, which may not bode well for a sustained run this season. Oddly, this leaves New England as the white hats, at least for me. They are a flawed team, but there's still a trust with them that does not necessarily exist with others.

These are all teams can beat any team in the league at home but there's something about each that instrinsically can't be trusted. For Baltimore, the offense, for New Orleans, the defense and both units for Detroit and Atlanta. All of them have landmark games coming up in the next few weeks to put our fears at ease.

The only thing keeping the Bengals lower is the fact that they are the Bengals. The Giants, the Texans and the Bills have good records and can't be ignored but none is consistent enough to have faith in. All three could lose at home to the Colts and I would think, well yeah, that's what you get with them.

All of these teams should be higher but haven't backed up their claims to the throne with results. Oakland is particularly concerning with the faith in a QB who claimed he was working out while he was not playing, but there was no evidence of that against the Chiefs. Dallas too, they flatter to deceive. At some point you have to wonder if they really are just that dysfunctional.

Tampa and Chicago will probably miss the playoffs in the crowded NFC, but despite how weak they both are, Kansas City and San Diego could very well make it in, though they'd probably lose in their first game as usual. Kansas City's revival is to be credited though - even if it has nothing to with the expensive Matt Cassel.

Tennessee has fallen away in my opinion following two humiliating defeats and a labored win against the pathetic Colts. Chris Johnson has been a disaster, another victim of lazing around when you're holding out. At some point, we have to bring out that old NFL saying "Stats are for losers" when talking about Cam Newton's exploits. A couple of years ago, Mark Sanchez was putting up horrible numbers and playing like crap, but the narrative was, "Oh my, look at this guy, he just wins! Toss him the car keys!". So which is it? Great play and loss after loss or wounded turkey throws and a bunch of lucky victories?

The Redskins scuppered their own season when they moved from a guy with the support of the locker room in Rex Grossman to John Beck. Not that Beck is terrible, it just affirmed in the team a lack of belief in their level of talent from the coaching staff. From the top team in the NFC East, they've become a laughing stock and could well continue dropping like a stone in the rankings.

Despite being winless, Miami has played ok. That can't be said for the three teams below them, save one or two lucky wins here or there. The worst of the worst are obviously the Colts. Phil Simms suggested last week that Peyton Manning "wouldn't allow" the Colts to draft Andrew Luck. Manning was quick to deny this and jab back, but I've heard from a couple of other people who have escaped the Colts internal divisions recently who say that if given the first pick, Irsay would prefer to trade it rather than pick Luck. Could Simms have relayed a private conversation and betrayed a confidence revealing for certain who's really in charge up there?

The Bills are pretty good at home so in a roughly equal matchup, I have to take the points. Hopefully Sanchez throws a ton of picks. The next one I wrestled with but the Cowboys should be able to pull away at home. In the dome, the Falcons should be able to easily overwhelm an inferior team. Meanwhile out at Arrowhead, the Dolphins are overdue a win and the Chiefs were really lucky to win on Monday Night. Their defense is cancelled out by their offense and of course, the Dolphins are better on the road.

At home the Saints are pretty good but the Buccs always play them tough. The Saints had a really bad loss last week and while the last time that happened they went out the next time out and won 62-7, it's indicative of a more deeply-rooted problem. The Redskins are reeling after three ugly losses in a row and this has all the makings of another one. The 49ers haven't feared going west unlike some other west coast teams in recent years and should be able to take this one easy. The Browns continue to not impress me at all, I don't see how they can keep up with the Texans.

The Bengals are a better team overall than the Titans and I like them going on the road. I could see them overhauling both Pittsburgh and Baltimore in that division chase. 9 feels like too many to lay against the Giants. They might lose games they're supposed to win but they're not going to get blown out by a team they're supposed to lose to. Picking the Broncos is more of a vote of no-confidence in the Raiders and Carson Palmer. I hope Tebow is able to play better, unlike a lot of other people who then turn around and try and deny it, I'm not rooting for him to fail because I'm jealous and resent him.

Sam Bradford is listed as questionable so despite their fluke win over the Saints, I think the Cardinals claw one back here. I pick the Packers on principle, the Chargers are so awful and Norv is heading for the exit. I picked against the Ravens earlier in the season and they won by four touchdowns, but I don't care, the Steelers have a head of steam now and should be able to thrash them for their revenge. The Eagles are getting hype again after a couple of wins, but 7.5 is going nuts. The Bears play teams close and should be able to hang in here.