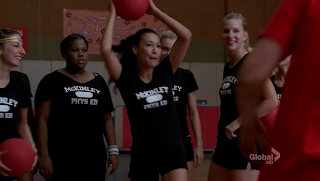 Again I won't spend too much time on this one. We'll start with the asinine Kurt/Rachel storyline. I kinda used to like Rachel but she is starting to grate on me now the way she apparently does everyone else. She accuses herself of being a drama queen when talking to Kurt but it's obvious that he is the poutiest of them all, unhappy with her decision to run for student body president. His pledge to ban dodgeball is so stupid and lily-livered it's unbelievable. Jameson and I talked about this that Ryan Murphy must have had a torrid time at school back in the day and is now trying to claim some sort of Pyrrhic  victory by writing the life he wished he had, a world where contact sports are banned because he sucked at them. It's idiotic. I can't wait for Kurt to graduate and be gone forever. I hope he doesn't get into NYADA either, the little punk.

The scene where Santana and her cronies smash their dodgeballs into Rory was virtually identical to one in a first season episode of Buffy the Vampire Slayer, 'The Pack' where Xander and his new buddies do the same to a similarly gawky, awkward youth. Finn does all the talking about Santana's motivation for acting out, spurred by her unspeakable love for Brittany which everyone already knows about. She makes almost constant reference to the fact she slept with Finn in this episode so I once again would say bisexual, but this show is really stupid so it apparently doesn't cross anyone's mind. What's particularly annoying is that she spent most of the past two seasons mooning over Puck so it's like the writers woke up one day and decided they needed another gay character. This storyline is really stupid too. I hope Brittany pairs off with some dude and leaves Santana alone and crying.

Then we get Puck talking about how much of an adult he is while still sporting that stupid mohawk. It's pretty easy at this point for Shelby to reject his advances on the grounds that he is a deluded man-child but at least he's not loopy stupid like Quinn. Then we get Sue and her stupid campaign. James tries to interpret character against type and figures that Sue is the best thing about the show as she is so on point with so much of what she says but I know too much about how television writing works. What's going on here is as stupid and biased as it gets, it reminds me of the Sarah Palin SNL skits where a left wing writer takes aim at their hated right wing opponents, fires and exclaims, "Zing!!".

I'm pretty mad right now, like an earlier episode of Dexter i got angrier and angrier as I sat here and thought about this episode, so this is probably unfair but i don't too much good to say about what I saw here. Oh yeah, also they had that one scene with Mike and his dad last week and here... nothing. C'mon man! I will say though, that in the entirety of the dodgeball game, he was the only dude I saw who actually threw the ball like he knew what he was doing. Tellingly, we never saw Finn throw the rock.

"Glee" airs Tuesdays on Fox at 8pm EST.
Posted by jigenzanittou at 23:28