Dean Pelton is charged with making a brand-new recruitment video for Greendale but goes overboard in ensuring its perfection. 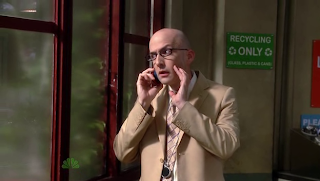 Pretty good episode, I'm a bit removed from watching it now so I can't recall specifics but it's the kind of episode that reminds me I really need to go back and watch this again from the beginning because it's a really fun show that tries a lot of different things you don't usually see. It's replete with homages and not everything works as well as it should, but that's enough to rank it as the best comedy currently airing out there, Modern Family's more mainstream appeal notwithstanding.

I liked Jeff Garland's cameo. I liked the Dean rather paradoxically behaving more humanly the crazier he got. not such a fan of Britta and Troy, Abed gave them a similar kind of look to what stonedTed gave Barney at the end of this week's How I Met Your Mother, almost like he feels threatened. I agree with the executives, it needed more Asians in blonde wigs too. Overall though, much better than last week.

"Community" airs Thursdays on NBC at 8:00pm EST
Posted by jigenzanittou at 23:06