Max takes aim at Ivy as the Rhodes family gathers for a function. Nate finds he has family problems of his own brewing. Blair makes a naked attempt to get closer to Chuck under the pretense of getting tips on making Louis a better man. 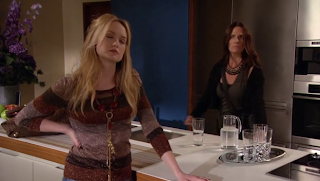 I was playing Dragon Age: Origins last night and took on the Harvester, the hardest boss in the entire game, on hard mode. I wasn't having any success with my regular mage build, so I reconfigured my character into an Arcane Warrior, a beastly tank which attacks bounce off without you even having to do anything. I suspect that's also the secret to the success Ivy/Charlie is having in maintaining her cover. Max throws his best at her but doesn't even scratch her armor. It would probably have helped if he had been up front from the beginning, rather than getting sucked into the game like everyone else.

We get to hear a little of Ivy's real story - pretty much cliché white trash stuff, but with enough of a passion for the stage she was able to drag herself up from the depths and catch the eye of Carol. The real Charlie's death remains under mysterious circumstances, alluded to here by Carol as something particularly unpleasant. Presumably some form of grisly suicide, though it begs several questions, how much does Ivy know? How did the death stay out of the news, was the body disposed of? How different does Ivy looks from the real Charlie?

Max meanwhile is left out in the cold exiled after being denied his blackmail money; I thought he pushed his hand too far with his demands last week. A lesson learnt from the Sopranos is that rather than hitting someone up with a large amount all at once, you bleed them and bleed them slow until they're dry. Ivy is too haughty with him in their subsequent conversation. His next move probably involves tracking down her real family, who will either be much the worse for wear or 'reformed'. Maybe he will team up with Diana when she returns. I doubt he is cut out for the rigors though.

What of Serena, will she continue to feud with Charlie over Max or will the hasty explanations thrust forth by Carol and Lily placate her? She's currently holding a grudge too many. Cece too - I didn't catch what medicine she was taking. Some kind of terminal disease? She favors Charlie for now, that could work in her favor as she continues to avoid detection.It's curious the bond they develop, even the one she has with Lily is very comfortable. I think a lot of hardcore Gossip Girl fans really dislike the Ivy character but for me it's the most engaging part of the show right now.

The least engaging is the Blair/Chuck nonsense. When you telegraph your movements and make claims off air the way they have done regarding this subject, all dramatic tension is lost, not that it's a great couple to begin with. Blair correctly ntoes that her influence was exceedingly bad for him, and now free from that, he has begun to flourish. She goes to him supposedly seeking answers but really it's nothing more than trying to tease him to get a rise.

Nate's storyline is really dumb and honestly, the less we have to remind ourselves of the insipid Trip, the better. Van der Bilt wants to make Nate some kind of media mogul, but wasn't he pushing him to take a position with the state senator? On top of being stupid, it's contradictory. The forgotten guy is Dan. Looks like my prediction of romance between him and Alessandra Steele may come to pass. She is far more upbeat than him which makes it awkward at first but she hasn't really been given the screen time to assert her character yet.

A mixed bag of an episode, I was pretty much fine with it though. It sets up nicely for future shenanigans. I think it might be easier for Ivy if Carol sticks around to help combat Max as he seeks revenge.