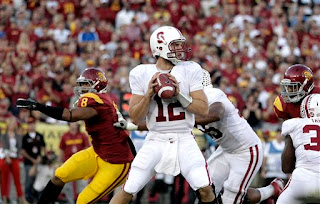 I've been playing Dragon Age: Origins, and in this game they have an area called Orzammar, home of the dwarves who rather than worship any deities, instead worship their ancestors - during their life, some dwarves are appointed as Paragons, those who have contributed to dwarven society in some significant way and statues are then built of them and placed in the Hall of Heroes at the entrance to the city.

Approaching Bryant-Denney Stadium tomorrow for the most humongous regular season game since the '08 SEC Championship game and '06 Ohio State-Michigan, you'll see the same thing; a statue of the latest living Dwarven Paragon, National Championship winning head coach Nick Saban. Everyone thinks Bhelen is some kind of tyrant, but those Orzammar hicks have never seen the Nicktator at work. He has things locked down so tight over there that starting quarterback AJ McCarron doesn't even do any media at all. I doubt that kid is getting involved in a bar fight anytime soon.

The big talk already is of this being a rematch in the BCS Championship Game. Hold your horses! This is why we have a regular season! This is why the regular season is so awesome! It's like a Super Bowl in November, and if you start introducing nonsense like extended playoffs, a game like this would lose most of its meaning. Please, NCAA. I know you love TV money, but resist the urge.

Boston College is worse than useless, and they along with some personal stuff has me pretty damn angry right now so lets speed through the rest of these so I can get back to wallowing in my usual pit of depression. Both these Texas teams are pretty up and down, I don't trust Texas to pull away from Tech, I think the Red Raiders will be up for that one in a way they weren't for Iowa State. I think Michigan is just better than Iowa. 4 points should be easy. Texas A&M won't get it done in Norman. No way. They lack the mental fortitude.

I could say that about Pitt too. They're another team I have no faith in to win when it really counts. Home advantage should mean a lot to Arkansas. South Carolina can't move the ball at all. Notre Dame should be able to sweep aside Wake Forest, but I never feel good about taking them because they always have so many self-inflcited wounds. I boobed last week with these two teams, I'm not making the same mistake twice. The Wildcats are not in the same class, particularly not in Stillwater.

This line came out and knocked me out. All the way along, I've been saying that Alabama is the better team and Alabama will win but that number, 5, that seems too high. I think LSU can still keep it close even if they fall just short, let's call it Alabama 22, LSU 20. In the last game of the day, kicking off at the usual ridiculously late Pac-12 time of 10:30 EST, Washington is way too crappy on defense to have any answer whatsoever for the Ducks. Maybe next year.