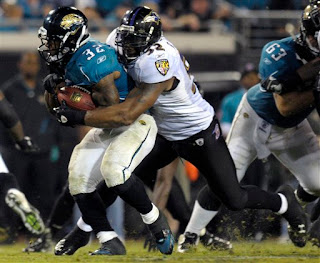 When are people going to stop going on and on and on about the "Suck for Luck" campaign? Besides the obvious, which is that there is no NFL professional actively trying to lose, I seem to remember that a similar thing happened last year. Everyone just assumed that it was a straight fight between the Bills and the Panthers for Andrew Luck, but instead he stayed in school. Well as it turns out, he's still only a junior. It seems a lot more likely that he will actually enter the draft next year, but can you really be certain? What if he doesn't? Then what do you do? Lose out again for another year?

Then we have to ask the question none of the talking bobbleheads will - are you sure he's as good as everyone claims? What if he's average? What if he's Eli Manning? What if he's just not that good? If as an owner/GM combo you are cutting your roster to make it weak, where is the foundation that a young QB will need? Andrew Luck himself thinks "Suck for Luck" is pretty much the stupidest thing he's ever heard. I couldn't agree more and wish everyone would stop bandying it about as though it were a real thing.

Week 2 of AJ Feeley and it won't get any better - the Saints will feel right at home in the Dome. At least the Cardinals won the World Series! That should ease the pressure on Spagnuolo and co. The last time the Giants were favored this big at home, they lost by 11. I doubt the Dolphins can pull that off, but they should be able to stay close. The Colts are a dumpster fire but I've lost trust in the Titans after their own pathetic displays of late. People love Cam Newton, I love Adrian Peterson. Carolina's defense is horrific and if Leslie Frazier gets smart, he'll have his guys pound them down and keep the laptop thief charming young man on the sideline.

Kevin Kolb vs the Ravens at home? I know who I like in that matchup. The Redskins are collapsing - teams off a bye have done badly, but Washington can't score with Buffalo. Jaguars on a short week are in no shape to face up with houston, especially on a Battle Red day. Bad timing for Jacksonville. Something is not quite right about the Lions either. I'll take the Broncos but it could be a get well game for Detroit. Doesn't matter is Tarvaris or Chaz plays at QB for Seattle, they probably won't be able to score against the Bengals. That looks like another ugly, low-scoring affair.

It's amking me nervous that everyone keeps bringing up that the Pats always beat the Steelers - that's how you go about jinxing a team. I still don't like the Browns even though they somehow won last week - they're shaping up to get blown out here. The Cowboys have had a tough schedule early but I think they are flat out better than the Eagles. If they can get the running game going like they did last week, Philly doesn't stand a chance. On Monday night, I like the resurgent Chiefs - they always play the Chargers tough and the Chargers aren't even that good anymore.