Blair has the results of the paternity test but refuses to look at them. Dan tries to help her but also has a problem of his own to deal with. Charlie/Ivy touches down in NYC but has to face up to the family. 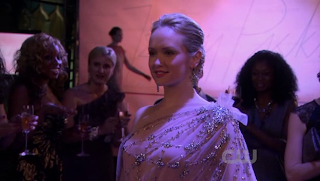 Well, the ratings have come down the pipe and all indications are that this is going to be the final season for Giossip Girl. With that in mind, our characters are going to have to be comfortable with adulthood by the end of the show and a large part of that as some characters find, and other staunchly avoid in this episode, is a well known saying - own your baggage.

Dan is the only one of them who truly embraces that here. Initially, he is still running around trying to stop his manuscript from being published lest he be rousted from his complacent existence as a nouveau riche society boy. But that's not the place from where he came, he has always been a 'commoner' at heart. As his former mentor Shapiro is able to impress upon him, there's no mileage in being timid allowing innate talent to fester in the shadows. Dan accepts the responsibility and ultimately, the plaudits for the literature about to unleashed over the heads of the UES and it's sure to have life-altering consequences for everyone involved.

Dan's story ties into pretty well every character in this episode but we might as well discuss Chuck next, another guy who is starting to come around and reclaim the maturity he began to display in season 3. At the start of the episode, he is still wallowing in a well of his own despair and is still not all the way back by the end, weeping alone once Blair reveals her pregnancy by Louis to him, but he is compelled to care for the puppy that Dan brings him from the pound, amateur pet therapy. The only other living being who has truly needed the care and protection he has to provide was Eva, his former fiancée that he drove away with his own self-doubt. Dogs however provide unconditional love and it will be a good experience for him.

Next up is Nate. Poor, stupid Nate, not so different from the puppy that Chuck now touts. He is dragged from escapade to hare-brained scheme by new benefactor Diana Payne. I'm not sure he even truly understands what she is planning. While he objects to being treated as a gigolo by her, he barely understands that his other job prospect with the senator is the result of nepotism. As much as Dan's forthcoming tell-all novel is sure to send shockwaves through society, the digging done by Payne as she attempts to outdo the relatively tame Gossip Girl is sure to have more catastrophic outcomes.

While Dan heads in one direction, going the direct opposite way is Ivy, who so reminds me of Jenny, that is to say the Jenny from season 1 when this show was legitimately good. She understands that she made a terrible mistake going to NYC and yearns for the real life that her boyfriend in Oregon could offer but the allure of the simple, charmed, beautiful life that Serena has is too much. "Everything here sparkles," she says but it's equally as fragile. It is all fashion shows and shopping trips now, but what of the future, is she prepared for what will be expected of her as a UES? Now that Nate and Payne have her phone, how fast will they suss the ruse?

Finally, we have Blair who at the same time as running away from her responsibility as an adult is running toward a goal all of her own. It would overcomplicate matters if Louis was not the father of her baby but Dan and Dorota are right - without ever learning the truth, she will never be able to stop thinking about it. That she had the paternity test performed reveals her desire to know. However, without the support of Dan who is busy dealing with his own problems, she adeptly sidesteps the issue and goes on with an assumed lie that has as much hope of lasting as the facade of Charlie Rhodes.

While at this point it's obvious to anyone who has ever watched any television that Chuck must be the real father, Blair might find herself pretty jealous very soon - Dan was getting awfully friendly with Shapiro's striking assistant Alessandra Steele. Perhaps, that envy will be reserved for Serena - she had very little to do in this episode besides float around acting as Ivy's fairy godmother. Lily showed up for the first time that I can remember this season, frankly it felt a little ridiculous. Fun episode, I liked it. Kaylee DeFer is growing on me - as well as Jenny, Ivy reminds me a little of Bridget from the CW's other unwatched show, Ringer.