House is nearing the end of his jail term after crashing his car into Cuddy's house when his diagnostic juices are set flowing once more. 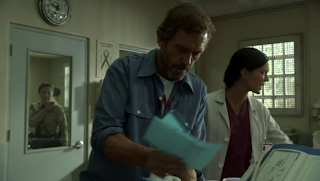 In some ways this almost felt like a pilot - House the mercurial prison doctor. In all ways, this is a new start in what's expected to be the final season. The big news before the finale last season of course was Lisa Edelstein's departure from the show. Olivia Wilde is also set to leave, possibly in a tragic end for her own terminally ill character. It seems as though she'll be replaced by Dr. Jessica Adams (Odette Annable) but what structure this season will take is a mystery thus far, at least to the spoiler-free me.

When the corrections officer asks House at the beginning of the episode if he would be able to stay out of trouble for the next five days, you knew there was no way it would end well. As he ends the episode in solitary with Adams presumably fired though, he can't stay there, right? They still have five other actors on their headline. The sixth season began in a similar fashion, with a double-length pilot and no series regular other than Hugh Laurie. Back then, he was learning to live without Vicodin, but here he is very much back off the wagon.

In Mayfield, his fellow inmates were a colorful crew all with their own adorable idiosyncracies. We're led to believe at the start of the episode that jail has been the same type of experience for House but it quickly becomes clear it is a veneer with prisoners acting nice for the benefit of the guards while viciously muscling each other for the sake of their own survival. As a departure tax, a particularly senior neo-nazi demands the twenty vicodin of the title from House who can't help but dip into his own funds.

While House denies and deflects Adams's perception of his abilities as a doctor, he can't help but be drawn into the case that presents itself. It's as though just as he could sniff freedom, the urge to resume his former life begins to return - but he pushes it down and talks of becoming a physicist because he has nowhere to go once he out - it seems even Wilson has dropped him.

Has prison changed him? Is he truly remorseful for what he has done? These are the big questions - His demeanour is meekened by association with people he cannot bully - but when he comes into contact with Adams, all too malleable in her first appearance, he seems to revel in it. If once he is out and returns to his old ways, it will all be for naught as the dalliance with Cuddy ultimately turned out to be.

I'm not sure what's next, but I hope we're out of prison by the end of the next episode. Judging simply by the fact that most of the cast is returning, a reconciliation with Wilson looms, perhaps with a new Chief of Medicine (Charlyne Yi?) at Princeton Plainsboro and a new hire in his latest disciple. How have the other characters fared in the eight months House has been away? Taub will be a father by now. Foreman must have taken the lead but may be more empty than ever. Thirteen and Chase seemed to really connect. Wilson? Maybe he will not be so quick to forgive. This episode whet my appetite and I am looking forward to it - fangirls be damned.