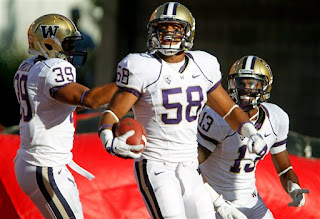 After Texas A&M's second straight catastrophic second half collapse confirmed them as the Minnesota Vikings of the FBS last week, I got to wondering about their running back, I young man named Christine Michael. What kind of parent names their son Christine? What is it a mistake? An accident? What kind of crap has he had to take over the years? Is having to deal it what's made him a tough football player? You often see a wide variety of chaps with very strange names on the field on Saturdays, such as Jadaveon, Jermauria, T-Bob, and my personal favorite, HaHa (short for "Ha'Sean", naturally) but msot of them are, well, of a particular heritage that the average fan probably isn't too well versed in so maybe we should jsut leave it at that. Yeah.

More evidence of how stupid Thursday games are: anecdotal evidence live from Eugene, Oregon where people weren't even bothering to show up to classes because they wanted to watch the game. Eventually, the lecturer just let the saps (like Chris for example) who actually showed up off early. A spread of 24 and Cal can't even cover that. Enough with it already. Garrett Gilbert is out at Texas, likely headed for SMU. David Ash and Case McCoy are double-teaming at QB but while that nonsense may have worked against the likes of Rice and UCLA, the Sooners are a different story.

As long as Notre Dame plays like they should do at home, they should easily take care of Air Force. The Irish should really be ranked in the top 20 at least, those two self-inflicted defeats to open the season have really hurt them unnecessarily. Florida got stomped in the Swamp last week, I can't imagine it'll be any better against practically an identical opoonent on hostile ground. Let's hope Les Miles doesn't screw it up by playing Jordan Jefferson too much - that will be the downfall of the Tigers this season if they're not careful.

I foolishly picked against Kansas State last week - I must have thought Ron Prince was still the coach. Against Missouri at home, it will be tight, but K-State has a lot of moxie. What a turgid pile of crap served up by Va. Tech last week. My pick of Miami is more on principle than any solid belief. Auburn have not dipped below my expectations so far this year, and I like them to hold Arkansas within reach at a minimum. It may not be a vintage class for them, but they are still more than capable of competing in the SEC West.

Tennessee at home should be able to take care of Georgia if they have any fantasies of being a good team. Texas A&M have had it rough of late but Tech is not in the same class as Arkansas or OK State. In the last featured game of the day, Ohio State has worn my patience thin. Nebraska will be smarting from their humiliation last week at the hands of Wisconsin and back at home will expose the Buckeyes lack of playmaking experience on offense once again.