How I Met Your Mother - S7 E4 - The Stinson Missile Crisis

Robin is in court mandated psychotherapy after assaulting another woman while helping Barney clean house. Ted is determined to remain close to Marshall and Lily as the pregnancy develops. 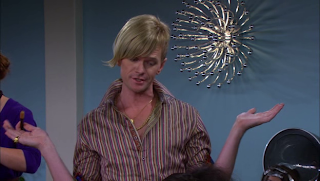 1 - (Kal Penn's future role on the show has been promoted as such) Robin's new love interest is her therapist? Who hasn't had that fantasy?

16 - "When do i get to be the woman?" Hah.
Where have i seen this lamaze teacher before?

19 - How convenient that it all 'ties together'.

Aside from the fact, as previously and frequently mentioned I'm not on the Barney/Robin train at all, this was a good, fun episode. I suspect that pregnancy is already making Lily more selfish and hard-headed than ever before though it's fair for her to wonder when Ted is going to butt out. Poor Ted, he needs a good new storyline stat.