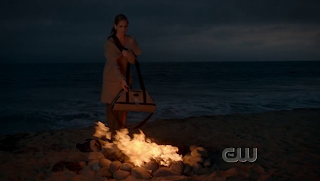 This was a fascinating episode in parts and really, awfully sluggish in others. It was fairly obvious that the opening scene was a dream, but it underlines Bridget's fear of discovery. While she's freaking out about her own crosses to bear though, it's Siobahn's lies and secrets which come back to bite her at the end of the episode. There was one incredible moment of idiot ball bouncing where after talking to Agent Machado, she sets her phone in plain view for him to investigate while she walks away. .

Machado is hot on Bridget's trail after hearing the panicky message she left for the coastguard after Siobahn's disappearance - but he's still assuming that it was Siobahn. He can't have spent much time holding Bridget in protective custody before she escaped as he would seem very inept otherwise not to have recognized her by now. He does at least smell the rat.

The tender exchange between a drunk Henry and a wary Bridget is witnessed by Gemma, finally learning the truth about Siobahn and Henry's affair. Earlier in the episode, she had been visited by Machado who was no doubt keen to plant the seeds of doubt in Gemma's mind but settles for merely revealing at this point the existence of a twin which it seems no one in Siobahn's life knows.

Witnessing the angry reaction of Gemma at her birthday dinner, Bridget panics and reveals the truth about her identity in the thrilling final scene of the episode - moving forward how will it play out? Bridget's account of her fall out with Siobahn from the POV of Siobahn was heart-breaking. Gemma while frequently caustic and hysterical overall seems like a woman with a large heart. I don't think she will have the stomach to use Bridget's reveal against her and will come to provide the support Bridget needs.

The flashbacks in this episode were very well done - they set the mood perfectly for everything playing out in the Hamptons and the story of the necklace traded back and forth between the twins was so bittersweet. However, this episode was ruined - ruined - by the subplot of present day Siobahn. Evidently Siobahn's machinations in Paris somehow involve Andrew's finance company, perhaps aiming to swindle him somehow. Really, no one can say for sure what she is up to but I can promise you one thing - it will be terribly convoluted.

It's impossible to disregard the Siobahn scenes or give the show a pass because it disrupted the flow of the episode and really caused it to drag in the final third. It would have been a very fine episode otherwise.