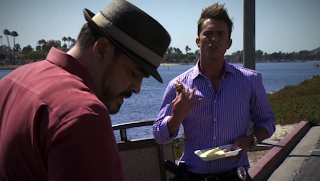 Some spoilers after the jump.

Man, I can't pretend I'm sold on this season jsut yet, I may have mentioned in a previous recap that it all seems very cartoonish all of a sudden and this was the most guilty episode yet. Not that a show about a vigilante serial murderer is particularly realistic, but pretty much everything that happened here made me want to yell out, "C'mon, Man!".

Dexter and Brother Sam is a made for TV bromance if ever I saw one. I think I was as surprised as Deb that they became fast buddies so quickly. Maybe the Brother is seeking out someone to watch his back for him if ever he needs timely assistance of some sort. Dexter is curious about the whole faith thing and intrigued by Sam's past and internal conflict so one could see how he could become obsessed with that sort of dude. However, Harrison's sudden appendix rupture was like an anvil dropping from the sky. Whaaat? C'mon Man!

The only real part of this episode was watching Deb waddle around in those heels and get way too familiar in the elevator for Dexter's comfort. I knew that 'people would love her demeanor' in the press release. Would they in real life? It seems more like the people who didn't would shout louder than those who did. Also, when will she remember that LaGuerta hates her and she hates LaGuerta? And just exactly how much of a waste of space if LaGuerta's character these days? C'mon (wo)man!

What's with Lt. Daniels II from the Ipsilanti Chicago branch? Are they trying to brew a horribly ill-conceived romance between him and Deb? Yeesh. I know Quinn is a bad boy and Batista is (despite his denial) in a mid-life crisis but smoking weed in the middle of the day? There's never been anything in any previous season to suggest they would each do anything of the sort. C'mon man! That Ryan/Masuka sideplot wrapped up a little too conveniently, it's probably not all over there. She claims to have some financial issues, I wonder if she owes money to a character we have already seen?

Last and definitely least, these villains are just plain rubbish. I know we're supposed to be slow burn. mysterious and cryptic but it's not really like that at all. It's more like getting hosed by a water cannon for two seconds at a time while watching their scenes. Their appearances are just plain stupid and ridiculous but are we supposed to just go along with it? C'mon Man! I knew that poor woman was doomed as soon as she showed up. The only things they have going for them is that they're more imaginative than George King and also, one of them is truly Forrest Gump's son.

BTW, I actually had a pretty good evening, I don't know why I got so worked up writing this.

"Dexter" airs Sundays on Showtime at 9:00pm EST.
Posted by jigenzanittou at 14:57