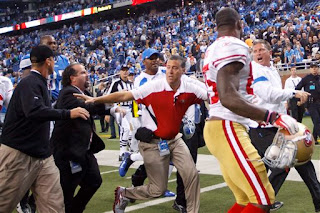 I'm 100% sure there's only one question on everyones minds this week - If all the NFL head coaches got together and had a fight club, who would win?? You don't have to live in suspense - I have the answers! I've ranked every coach tier by tier. Read on...

These fellas may have some skills, but just don't look intimidating enough - Leslie Frazier, Gary Kubiak, John Fox (loses points for being afraid of Tim Tebow), Pete Carroll (Great hustle, but far too wispy), Mike Smith (Looks immobile), Ron Rivera (When did he start wearing glasses? Totally ruins his look), Lovie Smith (Too calm, and not in the scary way)

These dudes are mean and have some swagger but aren't really cut out for a prolonged scrap - Tony Soprano Sparano (Old joke, I know), Ken Whisenhunt, Steve Spagnuolo (Bonus points for goatee, loss of rep for coaching the Rams), Tom Coughlin (What's American for "The Hairdryer"?), Marvin Lewis (You must be tough to be a prison guard), Hue Jackson, Mike Shanahan (That stare is utterly chilling, but he's somewhat miniscule)

These MEN are fearless and can hold their own against anyone out there - Jack Del Rio (Most macho name in the NFL - just say it out loud), Mike Munchak (You can't pick against former offensive linemen when it comes to tough), Raheem Morris (There might be some stereotyping involved), Bill Belichick (Self explanatory), Jim Schwartz (I feel like Jeff Fisher would have been in this tier too)

and a Half - They're a cut above Gold but not quite the champ - Mike Tomlin (There is no disputing how hard he looks... or am I thinking of Dr. Foreman?), Jim Harbaugh (outpointed Jim Schwartz in last week's heavyweight bout)

The Undisputed Champion - John Harbaugh - He is Jim's older brother, it really speaks for itself.

The Redskins have officially panicked! They've tossed the reins to John Beck going on the road against a rejuvenated Panthers team. That looks like a loss to me. I've said it before, but there is absolutely nothing about this Cleveland Browns team that interests or impresses me. I'm picking against them on principle. I talked before about how all these late finishes were going to catch up to the Lions. Well they did last week and I could easily see it happening again this week. The Maltese Falcons are used to playing in a dome and won't be fazed by Ford Field.

The Bucs return to Wembley, probably because of the Man Utd connection and I'll pick them hoping they lose. Oddly, coverage here is more interested in Jay Cutler than anything else. Titans have had two weeks to prepare, the Texans are reeling. Easy pick on paper. Also easy is taking the Jets to beat a fraudulent Chargers team who can't put anyone away and now have to go cross-country. Tim Tebow returns to Florida and people expect a pro-Broncos crowd going on the road. I like Tebow and I like the Broncos - what has happened with Miami is almost inexplicable.

The Raiders. Oh dear, the Raiders. I was feeling so good about them too. They've gone and handed the division to the Broncos and Chargers for the next ten years, but this season they can still compete but they even screwed that up with a mishandlement of QB reps this week. They should be able to grind out a win at home but I'll take a 6-point spread against them. The Steelers seem to play down to the competition, the Cardinals have had time to prepare and I like them in this matchup.

Bradford is out for the Rams, which is disastrous for them. AJ Feeley on the road? I'll pick against that. The Colts keep hanging in with teams they shouldn't and 13 is a too huge spread based on public perception. There's no spread big enough to not go with the Packers on right now though. Bastards. I promise at some point I'll get to some thoughts on Jack Del Rio. Hopefully he doesn't get fired after they lose this week so I can still be prescient with it.