Reagan and Chris go car hunting to replace her impractical convertible. Ava seeks a more serious tone for her show but struggles with the consequences of that. 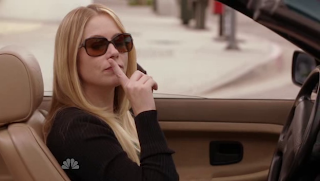 Paragraphs after the jump.

Solid episode - the Reagan/Chris thread was sweet as usual, dorky and inexperienced so they are as parents. Reagan desperation to be seen as cool is suffocating - when she rolls up next to a stranger in ehr car, she imagines what glamorous story they are concocting for her. She need to be reminded that she has a pretty sweet gig back in real life - as a producer on a hit show and as a mother to a gorgeous baby girl. Ultimately, she understands that the baby comes first, always.

Ava's thread was not nearly as annoying as it has been in recent weeks. The worry she holds that her lack of education will be exposed is real for many people when confronted by the kind of snobs who expect everyone to focus on the same level they do themselves. Lacking book smarts or the eye of arts critic does not necessarily make an individual stupid or ignorant though. Her intuition and knowledge on people saves her and enables her to direct her interview onto ground she is more comfortable with.

We can't let this pass without mentioning the forthcoming Arrested Development reunion. Will Arnett's role on this show is fairly muted, but I wonder about his schedule. Some people I'm sure want a full renewal for A.D. - I kind of feel it's been too long gone for that by now though. Up All Night has done relatively well both with ratings and critically so it will be around for a while to come yet.