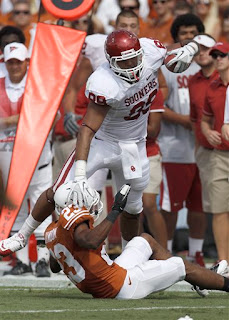 As we approach the midway point, it's time for a national title contender review! This time, we'll only look at the remaining unbeaten teams.

LSU & Alabama: At this point it looks fairly certain that one of these teams is going to end up unbeaten at the end of the year. Though they may not be overpowering offensively, I just don't see any team on their schedule outscoring them. LSU is ranked #1 but like most people I'd have to give the edge to Alabama based on recent history. And by recent history, yes, I mean Les Miles.

Oklahoma: The Sooners will probably be lining up opposite the SEC in the title game. They're not in the same class as that Sam Bradford team but I don't see any team on their schedule stopping them, especially having witnessed their evisceration of Texas last week.

Oklahoma State & Kansas State: Kansas State has about as much chance of remaining unbeaten as I have of scoring with Blake Lively. It's a nice story, one I might be inclined to expand on next week, but they have yet to play the Sooners or OK State who themselves I envision winning all their remaining games except for Bedlam where they'll get bludgeoned right in the cowpoke hat with a wood axe.

Clemson vs Georgia Tech: These teams will probably have to play each other twice - once during the regular season and once in the conference title game. I think they will knock each other out over the course of those games but frankly I don't see either one of them lasting out the ACC schedule in any case; these teams always have at least one embarassing performance in them. I would give the edge to Georgia Tech however - absolutely nobody is talking about them.

More & picks after the jump.

Wisconsin: They are the favorites in the Big Ten and as the great performances by Russell Wilson continue to stack up, it's becoming increasingly difficult to see where they could slip up. At Michigan State next week could be a stern test, as well as a prospective conference title game against either of the Michigans. If they do pull it off, it will be part of a great year in Wisconsin - the Packers are the best team in football, the Brewers still have a chance of making the World Series, and best of all, the NBA is locked out so they don't have to suffer watching the Bucks.

Michigan & Illinois: I don't believe in either of these teams; with Illinois I feel the reasons are obvious but with Michigan one could make the case that their performances are improving as the season goes along. Having watched their recent history however, I'm positive a defensive collapse is on the near horizon.

Stanford: The Cardinal have some pretty tough teams left on their schedule but critically, get all of them at home; Oregon, Washington and Notre Dame. Could one of them upset Andrew Luck's team? I would give all of them a shot. Stanford is probably the most vulnerable of the favorites.

Boise State: Utah has shown this season how well these top mid-major teams take to a big boy schedule. Boise doesn't have to contend with that so once they end the season unbeaten, and they will, there will be the usual crying and whining about how the Broncos aren't being given a chance at the big prize as they'll be behind Alabama and Oklahoma. Other than Georgia though, who have they beaten?

Houston: Don't look now, but the Cougars have a very good shot at going unbeaten. They won't overhaul Boise State in the rankings and could well be on the outside of the BCS looking in but they get SMU at home and are clearly better than every other team in conference. This would be a nice swansong if they accept the Big East invitation - of course however, they'd have to embark on their major conference schedule next year without Case Keenum.

Spare a thought for the WAC by the way, where there is not a single team above .500. Good God! The mantle has officially been passed from the Sun Belt as far as worst conference in Division I football goes.

I don't feel bad about picking California at all - even though they've been performing below par, so had USC and they had to go on the road on a Thursday night. The capitulation at home by the GOlden Bears was pathetic and you have to wonder if they're content with Jeff Tedford continuously flattering to deceive in Berkley. There's something about Michigan I just don't trust and this is the perfect week for their flaws to reveal themselves; having lsot three straight against the Spartans, their common game against Notre Dame resulted in a very, very fluky win for the Wolverines and I believe their luck will run out.

Texas A&M failed to cover against Texas Tech last week in another shocking defensive display and I fear it will be a similar story against the high-powered offense of the Baylor Bears. In yet another Scandal-hit-team vs. Scandal-ravaged team matchup, North Carolina is just better than Miami. As Cowherd noted, the best joke we've heard all year was that the NCAA found "no major violations" at Auburn. Bwahahahaha!

As I predicted, the McCoy/Ash duo failed to perform against a step-up in competition last week and it won't get any easier with OK State coming in. I see another blowout coming for the Longhorns. Ohio State somehoiw managed to cover against Nebraska last week, but Nebraska now must be 0-726 against the spread. I don't think they can score against the Illini. I'd say the same for Tennessee without Tyler Bray vs. LSU. No chance.

Maryland has a host of problems behind the scenes but I'm about ready for this Clemson hype to end so I'll pick them to win going away. That should put an end to their hopes. Kansas State lost by around 40-50 points in Lubbock last year. Obviously, it won't be that bad this time but sometimes, a team just has your number. ESPN Gameday is in Eugene to cover our last game and Chris hopes to hunt down Erin Andrews wherever she may be. I give him a better chance at accomplishing that goal than I do Arizona State getting close to an upset.