Dan prepares for the launch of his novel but his friends are unprepared for his havoc his literature will wreak upon their lives. Ivy tracks down her phone but retrieving it comes at a cost. 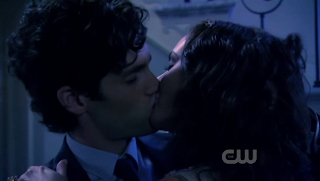 Dan gave everyone a copy of his book on the morning of his press release expecting them to have read it by the evening. Seriously dude? Of course, Blair and Serena only bothered to read the parts directly referencing themselves while Nate didn't even bother to read it at all. Nate is pouting because Dan worked him in as a composite character rather than as a fully fledged individual thinking their friendship should mean more, but it's probable he doesn't even truly understand what books actually are. Rufus has a similar reaction, feeling that Dan portrays him as a pathetic trophy husband, but honestly there's a reason it's called the Rufus Uselessness scale. They both need to take a long hard look at themselves rather than bearing petty anger towards Dan.

Nate is hardly an innocent guy. With the promise of a short-term fling in his pocket, he happily goes along with Diana Payne's nefarious schemes. Some might say he continues to hold a grudge against high society for the way his immediate family was shut out after his father's problems with the law but there's no way he thought it through that far. In her first scenes not interacting solely with Chace Crawford, Elizabeth Hurley acquits herself far better cornering Ivy into revealing her true identity. It was pretty dumb of Ivy to swipe her phone back at the point she did; she was probably counting on Nate's dull wits. She exerts her sexuality on him aggressively and if his attention strays from Diana to Charlie/Ivy, will he have second thoughts about working for Diana?

Blair et Louis, what a disaster that is. Louis always looks angry nowadays. Despite his insistences otherwise, it's been clear from his first appearance on the show pretending to be a driver that he loves to play mind games just as much as his sister and everyone else on the UES. He plays one short con after another in this episode, trying to force drama between himself, Blair and Dan - Unhealthy! The reaction of Blair et Louis seems irrational. The only way Dan's fantasies brought to life on the page could inspire so much rage if it, as Louis suspects, really did happen.

Serena complains about her own characterization, but what part of it is untrue? Everything does come easily for her. She flits about on fanciful whims and men and opportunities fall into her lap. Trip Van der Bilt is rumored to return at some point this season - what a perfect example he is. After all this time, she continues to refuse to own her baggage - she dismisses the story about champagne arriving at the school as a prank played by Georgina without explaining why Georgina thought it would be an appropriate prank to play.

Her loss of reputation and job opportunities is blamed on Dan, but it really is more of a reflection on the shallow douchenozzles rejecting her, and frankly, her own past behavior. Furthermore, word of her past indiscretions would not have spread if she hadn't been so loose lipped about her relationship to the author. That the brain is not connected to the mouth is hardly Dan's fault. She is another person who needs to have a hard look inside at themselves.

We talked last week about the re-maturation of Chuck and it shows in this episode; he understands that Dan's book is fiction, relying on a caricature of the base personality of the character involved. Rather than be offended by his portrayal, particularly the grisly end "Charlie Trout" meets, he quietly embraces it, yet also contemplates on what he can learn from that cautionary tale, eventually moved to seek emotional support from Lily (who was far too enthusastic about every single thing happening today - too long cooped up in house arrest?)

Chuck might challenge Dan for the affections of Alessandra Steele - She is almost motherly towards Dan in this episode, and I was half expecting Chuck to break his "I'm Chuck Bass" line while talking to her, or perhaps some ironic variation. Dan of course has a very strange road ahead himself. The first scene of the episode describes the final passage in his novel, a scene which plays out for real when Alessandra announces him as the author to the gathered crowd. While Nate, Blair and Serena have deserted him for now, he can likely still count on Chuck and Alessandra for support and he may have to turn back to Charlie as well.

This was another solid outing this season, with the drama ramping up yet still not having reached a crescendo. Moving forward, Serena's boss encourages her to make nice with Dan quickly so she can secure the film rights - Dan will probably be happy to acquiesce in a quick fix for that relationship, but Serena is known to be exceptionally petty. Where is Jenny in all of this? Taylor Momsen may have been fired/quit but it's not like she never existed.I;d rate this episode higher but right now, Louis spoils everything.