Dexter investigates an ex-convict who claims to have reformed due to his faith. Deb receives two unexpected propositions of very different natures.. 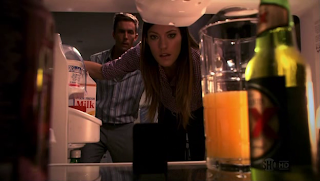 This episode was a little cartoonish actually, I think you could probably say that a lot of stuff that happens on Dexter is over the top, but it really struck me as I was watching it. I talked before about how difficult I had been finding it recently to take Deb seriously so to see her made lieutenant was a bit of a shocker. Matthews is our boy and he no doubt was trying to do the Morgan family a solid as much as he wanted to irk LaGuerta by promoting her but she'll have to deal with a level of bureaucracy and decision-making that she has no experience in. It will be good to see some old LaGuerta/Deb friction - my hope is that LaGuerta will be determined to see her sink.

It's interesting that the second thing Deb thought of after Dexter was Masuka? What could that possibly mean? More pertinently, she did not think of Quinn at all. All the way along it has felt all very casual from her perspective while he has done the old guy thing of overthinking the whole thing and letting his emotions get carried away. He has a bit of a maverick streak to him and will no doubt resent Deb now that she is his boss - Dexter's open contempt for Quinn was tolerable while he was banging his sister but now I expect he'll resume his surreptitious investigation of our protagonist.

It appears that Brother Sam (Mos Def) figures to be a recurring character this season. It's proven, for now anyway, that he's a guy that's truly reformed and remorseful for his past crimes - as a guy Dexter no doubt sees something of himself in, is this where we start to see Dexter develop his conscience? It's certainly the man from whom he'll be learning the finer points of faith in a higher power. Brother Sam notes that Dexter's quick reflexes when dealing with the Hispanic gangbangers was not very lab geek - without knowing anything of his new friends mild mannered facade, might he pick up on the darkness that dwells within?

Not much development on the Armageddon Duo played by Ed Olmos and Colin Hanks - we do see that Olmos plays some kind of professor though. He appears to hang out in a dilapidated church self-harming with a branding iron. It goes without saying that he is crazy but the larger goal is still unclear. I referred to Melinda Weintraub of Party Down last week and lo and behold, Molly Parker shows up here as Colin Hanks's sister! Their interactions are very cryptic also but it seems that she would be a grounding, human influence for her brother, something the professor is keen to steer his student away from.

The three little pigs is a far more appropriate bedtime story for your kid than tales of your exploits - doesn't Dexter know that kids say the darndest things? What was up with Ryan (Brea Grant), Masuka's assistant? She is not particularly bothered that he is kinda leering at her, but there's not any romance there yet. Maybe Deb could help out her Asian brother and order the two on a date. This was a little bit of an off episode, not up to the usual high standards set by this show.

"Dexter" airs Sundays on Showtime at 9:00pm EST.
Posted by jigenzanittou at 12:32