A flashback to a baby-less time as Reagan and Chris prepare for the birth of their daughter and Chris must decide how to deal with his job. 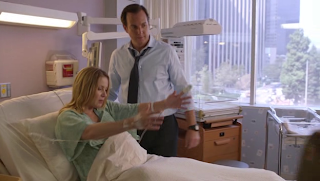 Decent episode, not so much to say really - Reagan is able to meticulously micromanage every aspect of Ava's show but her perfect birth plan falls apart on the big day - does it ever go right? She sneers at the lady on the show who claims she didn't know she was pregnant but is later put in place by circumstance and also the neighbor lady who she really ought to try and be friendlier to. Ava as usual somehow manages to make the whole affair about herself, when she bustles into the hospital with apologies and speeches, she is barely even noticed - such is her role on the programme, an irrelevant sideshow.

All all law firms like the one Chris worked at, or just on NBC? I swear Marshall worked at one with identical types of colleagues on How I Met Your Mother. The decision he's faced with is real hard; with Reagan's gig they probably don't need to worry an awful lot about cashflow but I wonder if pride will play a part going forward - we know that he foregoes an opportunity to become a junior partner and while he is enthusiastic about being a father, there's no doubt he has a sense of professional self-worth to have gotten to where he had prior to taking leave.

I don't talk about Missy at all partly because I keep forgetting her name, but apparently she is a main cast character. She needs a personality upgrade, stat! Strangely, she is firmer with Ava in this episode than anything we've seen in the future. The hair incident must have really shaken her up.