Kevin theorizes that people tend to seek out partners similar to their parents leading to awkward experiences for some of the gang. Meanwhile, Ted receives attention from Robin. 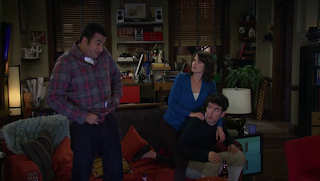 6 - Was that the same dentist from 2 broke girls?

8 - He should market some of these board games, I'd buy them just for the novelty, like Marshgammon.

9 - something horrible is going to happen on the balcony

16 - Nice call back to absent side characters

Fun episode, I watched Gossip Girl after this one and the theme there was one character who felt that the main male character was the love of her life and he should feel the same way about her even though they were not dating anymore. Could there be a little of that kinda thing going on between Ted and Robin? Whatever the case may be, Kevin clearly has not walked into a situation paced with good mental health. I laughed a lot during this episode, but it was also pretty gross, I have to say, so that prevents it from a top-tier grade.