Chris enrolls Amy in a stimulating playgroup but Reagan has trouble juggling attendance of that with her job and Ava. 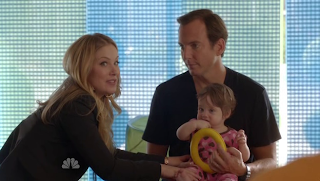 Steady improvement on Up All Night, with this the strongest episode yet. The best way to handle the Ava problem is to directly tie her story to Reagan as done in this episode . Early on, too much emphasis was placed on Ava's own projectsa but her over reliance on Reagan must first be established as it is in this episode. For years she has appeared to use her friend as an emotional crutch and going forward I expect her to grow up just as Amy is being raised.

"I'm not angry, I'm just disappointed"< says Chris when Reagan fluffs her dander up a little too much. The exasperation and exhaustion is displayed particularly well by Christina Applegate, trapped between two very different worlds. For now she's able to pull out a last minute win, minus outbursts like, "You're a fictional character!" but a day of reckoning is coming and I'm actually starting to look forward to it a little.