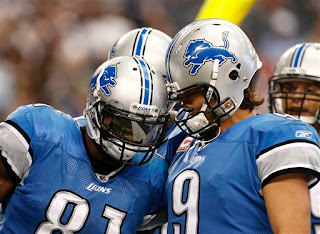 Quarter Mark Power Poll
This is a list based on who I think is better, regardless of record - although Bill Parcells did say of course, "You are what your record says you are."

That feels like a no-brainer top 4. You have to beat the champs to take their title and so far, unfortunately, no one has.

Dallas has a worse record than two other teams in their division but snatched defeat from the jaws of victory in both losses. I think the Texans will come crashing back down before long but for now they have to be given their due.

These teams might lack something critical upon first glance but I think they could stand toe-to-toe with any teams in the top 8 and live to tell the tale. They all could be in prime position to move up as well.

I might not get a better opportunity to point this out, but Trent Dilfer said about a year ago that if Matt Stafford, Mark Sanchez, Tim Tebow and Colt McCoy were all getting in a car, they'd toss the keys to Sanchez, that's the kind of confidence they have in him. Well, presumably, they are all drunk in that scenario and Sanchez is the one shouting the loudest.

I just don't think this batch of teams is particularly good, whatever the hype machine and reputation surrounding them may be. The Giants are easily the hardest team to figure out. I picked them to win the division each of the last few previous years and while it looked good for a while, they would collapse after about week 10 or so.

The Vikes need to dump McNabb, stat. They are wasting time with him and considering they are already 4 games behind the Packers and Lions, they might as well put Ponder in and let him take his lumps. It can't be any worse than it is now.

If Tarvaris Jackson can find his Sea legs (har har) the Seahawks may be able to drag themselves up. The run game is still terrible though, and that's what Pete Carroll really wants to do.

Maybe I'm being too harsh on the Rams, their schedule so far has been no picnic - on the other hand, at 0-4 they can kiss goodbye to their playoff hopes. I don't think they will ever catch up to the 49ers. As for Jacksonville... stay tuned, we'll be talking about that next week...

I'm gonna be kicking myself if Cam Newton throws 5 picks and the Saints romp to a 30 point victory, but the talk radio demagogues have swung me - I'm taking Carolina to at minimum backdoor cover again. Homefield should see the Bills and Colts through. It would be such a Bengals thing to do to dramatically beat the Bills last week and then capitulate this week but I heard that Jacksonville is planning a "whiteout" in their crowd where all the fans are supposed to wear white, something incredibly stupid like that. That switched me right off them - it never, ever works. I keep thinking of Georgia's infamous Blackout game against Alabama a few years ago.

I know as soon as I start picking the Giants they will lose, but I can't resist it this week - every time the Seahawks go out there lately, they get utterly demolished. My vote of no-confidence in Kevin Kolb continues. 49ers should win at home against an evenly matched team coming off a short week. The Chargers should also be able to take care of business and this one is a little more risky but because recent history is not on my side, but I'm all in on that Tennessee bandwagon to go in roust out the Steelers.

R.I.P. Al Davis. He's a guy no one in the media has had a good word for in several years now, but he really helped change the face of the league and turn the Raiders, what should have been a very regional team, into a worldwide brand. I hope they do his honor proud today in Houston. 9 seems too high even given how crap Sanchez played last Sunday night. We did get a 45-3 score in this game last year, but I think the second matchup between teams in a season is more telling of future performance - the Jets won that and they should cover here. Similarly, the Packers blew out the Falcons in the divisional playoffs last year and there is nothing special to indicate this time will be different. On Monday night, Hank Williams free now (they should hire Carrie Underwood to replace him), I like the Lions but professional bettors seem to disagree. Detroit is at home but have a history of giving up leads - what happens should they get behind and that Chicago defense bears it fangs?