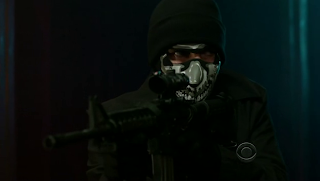 As always, not a lot to really explore with this show, I will say this though; I don't really watch its brothers, the NCIS and CSI's of the world, but if they're like this show has appears to be, then it's clear why CBS is the market leader. It may lack the fantasy, the X-factor if you will of a show like House or Michael Emerson's old show Lost but the production values are sky-high while plot and structure are razor sharp. Oddly though, even though this show is leading its timeslot, it's not doing as well as expected which is a shame because it's actually a good programme.

This episode was riveting - every week the show has improved and in this latest outing, a major antagonist was introduced (as opposed to the passing annoyance of Detective No-mates Carter). One thing this show does that will make it very popular is give the viewer a lot to think about while they're watching the show but not tax them once it is over. The narrative here was obvious - Reese sees a lot of himself in the ex-soldier he is following. Both pulled into performing unlawful acts and headed down a path of a short, lonely life. Reese does not want the same thing to happen to this young guy as he has experienced and once the facts begin to reveal themselves, pushes his new friend to stay close with his woman. Will he be able to push himself and track down the lady we see in his own flashbacks?

Couple of things that weren't quite right - the scene in the bar with the banker giving the two ex-soldiers aggro was very anvilicious. The whole point of a four man bank heist team is that one of the four stays in or near the vehicle so they can make a fast getaway - they screwed that up in GTAIV as well. Also, I bet everyone in that underground casino was in a lot of trouble after the cops busted in.

"Person of Interest" airs Thursdays on CBS at 9:00pm EST
Posted by jigenzanittou at 00:48