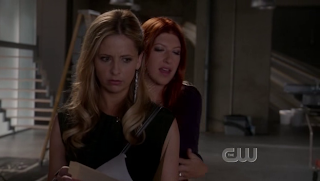 Skip to the end - how 'bout that ending? Of course, no body generally means no dead wife but Henry sure was acting suspicious. What could possibly have happened? The easy answer is, he had a screaming match with Gemma that got physical and he either bludgeoned or more likely shot her considering the distribution of blood on the wall. There's a possiblity of course that he just walked in and found the scene like that. But why would there be that kind of violence in his own home? I will say this - Siobahn was conspicuously absent from this episode. I will say another thing - five episodes in, they're frequently mentioned but we still haven't seen hide nor hair of Henry and Gemma's two sons.

Before her possible untimely death, Gemma is flummoxed by her realization that Siobahn is actually Bridget. While she has been a wreck since the start of the show, she incisively spots right away that whatever line Bridget may be trying to spin, it really is all about her. Gemma's demands of Bridget are unreasonable however and borne from pure rage;  there is really no benefit one way or another for her in the honey-trap plan that Gemma proposes. Ultimately, she chooses not to go through with it and instead warn Henry. What happens next is of course unknown. Did it unqittingly lead to Gemma's death? When Gemma calls Andrew at the end of the episode, is it because she plans to indeed tell Andrew everything that has happened, or is it because she is scared of Henry and needs a male person to back her up as she goes home?

This show is throwing up more questions than answers at this point, but one person who seems fairly straightforward is Juliet, even despite the three hilarious fake reveals. The first right at the start of the episode as Andrew and Bridget return home to find Siobahn's huge photo vandalized. It's presumed to have been Gemma but actually, it was Juliet. Later, we suspect that Juliet has discovered incriminating info on Bridget but actually, much like Bridget would, assumes that evidence of an NA meeting is for her benefit. Later still, Juliet drops a "she sleep with married men" bombshell on her father which the viewer takes to mean she knows about Siobahn and Henry, whena ctually she refers to the way in which Siobahn met her father. Once or twice is fine but at three, it's going over the top.

Juliet's mental scarring appears profound and has left her father upset and confused about what to do next. One wonders exactly how ham-fisted a job Siobahn did as a step-mother in the five years that have passed. As Bridget notes, a huge mess has been left. Presumably, the source of Juliet's pain is a perceived lack of attention but it appears as though she will soon be veritably swaddled in it with Bridget making an effort to prove herself as a mother. As Gemma pointed out though, she hasn't thought it through properly - she is meant to be pregnant after all. Bridget claims she doesn't intend to stay as Siobahn forever, but one wodners how exactly she plans to extricate herself from this situation.

This episode was ok, a little inconsistent as always but when I look out at all the identikit shows littering the landscape, the effort here is appreciated. This show really collapsed in the ratings but it's a part of a larger network failure so its future is up in the air. I'm not sure the concept has long-term viability though so it's possible they may not have as long as they'd hope to bring things to a head. I'd start with making the narrative less sprawling. While they cut Siobahn from this episode, the Malcolm/Bodaway situation is very distracting because as tortured as Malcolm is, we don't know anything about him so its tough to work up a great deal of sympathy for him and the danger from Bodaway is not imminent.