Mike comes under pressure from his father after a minor slip in his grades. Mercedes feels unappreciated and Will demands to see Emma's parents. 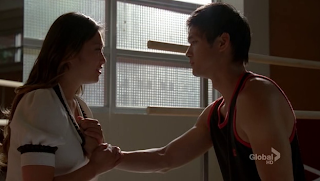 I've been waiting a long time to see more of Mike and his first real outing in the spotlight of the show was a mixed bag. I thought Harry Shum Jr. did a great job of it - as opposed to the extroverted machinations of some of the other characters, with Mike, trained to be that 'model minority' seen but not heard background player by his parents, the struggle is all internal but very much bubbling under the surface.

I am a little concerned about the portrayal of his parents - The father freaks out over an A minus - where have I seen that before? Seems very stereotypical. Mike Sr. appears to have been raised in America, speaking with a clear accent and trying to force Mike's fate in a particular direction. His wife appears to be a Chinese immigrant oppressed by her husband whose own fanciful dreams were crushed by strict parents. For all the appluase this show gets, it really does a terrible job of breaking free of cliches.

At least there's still Tina - it's the thought and support of her which ultimately keeps Mike driving to chase his fantasy of being an artist. Mike Sr and the Principal cite her as a bad influence but she seems to be the only person he trusts. We finally get to see perform a real song solo in this episode - considering all the times they've autotuned Heather Johnson, it's about time. Considering this is the family background they've had in place for Mike for a long time, it's overdue - it makes him a far more intriguing, conflicted character than some of the others the show has lavished attention on.

One of those people is Rachel, and while the resentment has seethed for a long time, Mercedes finally blows her top at the perceived favoritism. After getting in Quinn's face last week, Will gets aggressive with Mercedes and while she initially pushes herself to improve, she does not keep it up because she sees that Will rarely does the same with Rachel.

However, she fails to see the reason is tat Rachel is perfectly capable of motivating herself  which is why she has achieved and people are willing to give her the benefit of the doubt. While Mercedes is said to have outperformed Rachel at the sing-off, it's a rare slip, much like Mike's 'Asian F' . Mercedes's ego may not backed up by results but it's as inflated as Rachel's, leading her to quit in a huff and become the second member of Shelby Corcoran's rival glee club. As a sidelined character/member for more than a season now, her actions may be selfish but very understandable.

Will is not only taking a more aggressive stance with his students but also with Emma, pushing her to meet her parents. It turns out they're "ginger supremacists", presumably a primetime euphemism for a certain other kind of supremacy. Evidently, the root of Emma's psychological problems begins with them and while she says she forgives Will for inflicting them upon her when she is subconsciously desperate to escape their influence by marrying Will, well, Will has a history of self-sabotaging relationbships. I don't think this will be the last time he oversteps his bounds so disastrously.

Miscellaneous notes time. Brittany and Kurt are vying for the school president title, and Rachel decides to join the race too, although now that she has won the lead role in the Guys and Dolls production, she might drop out. Surely there are more kids at the school with the same aspiration? I could see Rachel as a legitimate contender, she has the air of a Tracy Flick about her. But the roster of classmates now more than ever feels very, very limited. Also, what a wishy-washy way for the school play judges to resolve the Mercedes/Rachel dilemma. There's a serious lack of diversity amongst the teachers at the school too, though this episode was mercifully free of Sue.

The musical numbers have been mostly tepid for a while now but I thought they really did a good job in this episode - the best two numbers ever on the show were the episode-ending performances in 1x2 "Showmance" and 1x7 "Throwdown" and I got that kind of feeling watching these. This episode wasn't as good as I was hoping but it was certainly a lot better and more interesting than the first two weeks.

"Glee" airs Tuesdays on Fox at 8pm EST.
Posted by jigenzanittou at 11:52