Caroline needs a bite guard (?) for her teeth and the only palatable place to retrieve one is her former apartment. 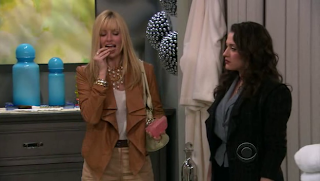 3 - Now theres no one in the diner. Scenery/dialogue dissonance.

4 - Her zinger per minutes rate is going up.

14 - "My grandmother got rid of her. Not in a mob way, but a society way which is worse"

15 - Aren't they gonna attract attention with all this music?

Apart from the lame karaoke sideplot, this was a good episode. Lots of good one-liners, even if Beth Behrs couldn't stop giggling all the way through. It's notable that Max is getting less cynical about Caroline's bizarre plans and ideas, and the visit to her former house and the sushi restaurant was able to give her a perspective on how her roommate used to live.