How I Met Your Mother - S7 E12 - Symphony of Illumination

Robin worries she might be pregnant but if wary about sharing her secret. Marshall befriends a neighborhood kid. 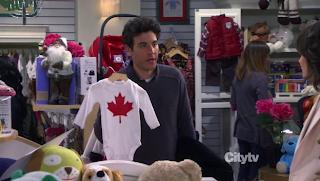 What a cool episode this turned out to be. I was all set to get mad at the telegraphing but I underestimated the brain trust behind the show - when they really want to they can still hit the mark pretty much perfect all along the line. Robin's story was so sad and perfectly handled and the final scene in the episode was so awesome. Speculating on how that largely neglected of late relationship will progress is likely fruitless at this point but nothing is done by accident on this show. It would totally be cheating if Ted's kids turned out to be in hsi imagination too, but Robin certainly has enough on an influence on him.

Barney's disgust at his former friend seems to revert his outlook considering how miserable the guy seems to be. The reaction was curious but likely won't stick as we see Barney getting married in the near future. The B-story was also very funny - I liked that they didn't bother to explain the sandwich joke - if you watch, you know. The insight was more of an affirmation of how we expect Marshall and Lily to be as parents. He's ultimately a little soft but that'll be balanced out just fine. I can't say enough good things about this episode, it was really good.