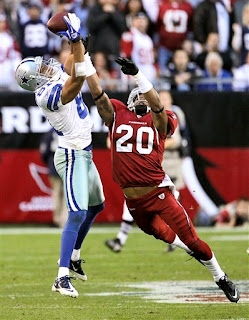 I wonder how NFL players remember all their passwords? That's my tenuous link to the NFL for this spiel. When they have to cram the contents of a 700 page playbook in their heads as well, how do they have space for passwords? You're told that you need a different password for every account you make and it needs to be randomly generated made up of letters, numbers, maybe even symbols. You're not supposed to write it down or keep any kind of record of it.

Impossible! If I go a few months without using an account I'll forget the password. Of course the worst part is, what happens when you remember the password but forget the name on the account? Then you're really screwed. I was allegedly told by Chris that what we need is some kind of biometric recognition system - turn over all our information to the machines and let them handle it for us. Sounds like a great idea, and he has no ulterior motive either. He's certainly not planning a machine uprising.

I don't have a good feeling about this weeks games but lets push on anyway. I thought the Steelers were overrated and they struggled to take care of the Browns once again in a Thursday game. The Colts scored a cover last week but the line is more reasonable this week and it would feel far more fluky. The Falcons laid an egg last week, if they do that again against this defense, then we should really start worrying. I still don't believe in the Texans, more fool me maybe but out of their home stadium, this will be a tough one for them to score in.

Both of these next teams are terrible but I have no faith in Mel Tucker as a head ball coach while Freeman should be playing for the Bucs. Leslie Frazier is another guy who doesn't know what he's doing in the lead role and the Lions blow out bad teams. The Chiefs should be able to tie down Mark Sanchez, a guy people still try and defend even as they bash Tebow. Do people still believe in the Eagles? I haven't all season. Called it.

That half point gives me a lot of pause but I'll go with the Broncos for homefield advantage and Caleb Hanie. Redskins-Patriots has the feel of an even game with Grossman making a critical error and the Pats pulling away late. Outside of their home stadium I'm not sure the Saints will be able to match the Titan's intensity. The value in the next game is with the Raiders who can run better than the Giants and should hopefully not be as flat as last week.

The Cardinals have played better as of late but Kevin Kolb is back now so I expect the 49ers to crush them. The Chargers caught fire last week but we alrady talked about Mel Tucker's failings. At home, a worse following than Jacksonville has by the way, I like them to fall back down to earth and struggle to pull away from Buffalo. I think the Giants are much better than the Cowboys and should embarass them. The only reasons they wouldn't is home field and Romo slingin' it. The Seahawks should be able to win easily on Monday night against the second worst team in the league. Go Hawks!