It's Abed's birthday and Jeff has arranged a surprise party, but Abed instead invites him to dinner at a fancy restaurant... 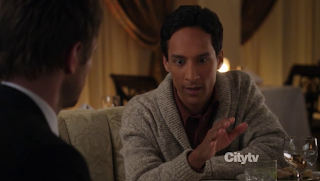 The surprise party concocted by Jeff is not only ingenious but very thoughtful. Abed isn't the most outwardly empathetic friend, but he is the least confrontational and that often equates to being favored. It was a little surprising to see that Chang was invited - maybe Jeff was just unable to shake him. Troy's insecurities about his friendship with Abed were charming but it's easy to see why Jeff is so appealing to Abed; as the leading man, he ticks all those boxes you'd expect him to and in the drama Abed imagines of life, there's a dark back-story locked away within the depths of Winger.

In the last episode, Troy and Abed claimed they didn't hang out with Jeff anymore because of Britta's "nipple-play" revelations but here, Abed indicates it's Jeff who has drawn away from them. I'm not sure Jeff ever wanted to be that close to him - although trusting and liking him, he still yearns for a more refined standard of life. While he decides that Abed's epiphany is just another game, I think there's something to it. At the beginning, Jeff calls back to Abed's breakdown at Christmas. When life moved past him so fast at that moment, it likely made him think hard about himself and the points he raises at dinner must be what he contemplates in his darker hours. While admitting that he is awkward in real life, he'd quite like to learn from Jeff, find out what makes him tick even if it's just another mask for him to wear.

I haven't seen Pulp Fiction in about ten years, so I don't remember all the character names; I know Jeff was dressed as Vincent Vega, Shirley as Jules, Chang was the boxer guy played by Bruce Willis. Britta was Mia (Uma Thurman's character), Troy was the house husband played by Quentin Tarantino and obviously Pierce was the Gimp. I didn't recognize Annie's character though - Bruce Willis's girlfriend or Rosanna Arquette's character I guess? I wonder what waitress Britta is like. She'd probably start lecturing you on calorie intake or processed meat. Pierce in a gimp suit wasn't nearly as gross as Chang's bare chest. And no, I haven't seen The Hangover.

This episode was awesome. It might have been my favorite this season; Even when it was being serious there still a high element of farce and was both touching and hilarious at the same time. The Jeff/Abed dialogues were just genius and all the little quips, like the airplane version of Pulp Fiction were gems. It definitely has to be seen and savored to be appreciated.