The team treats a homeless man with a ruined sense of smell. House gets engaged to a random Russian girl and generally acts like a massive cock. 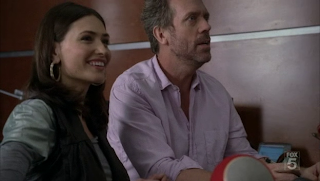 So has Masters finally been broken? With the next episode reportedly heralding the return of Thirteen, there won't be much time left for that particular arc. Not yet out of med school, she still has that perky quality which allows her to believe in core morality. If not now, it will be beaten out of her by the job eventually. Not just for patients, but the people around her too. As witnessed by the other jaded doctors in the team, nothing fazes them. House's antics crank up another notch from last week and they remain nonplussed. Heck, Taub even wants to join in on the fun. Masters is right to be concerned but given time, she would be conditioned to accept the behavior from both patient and colleague as normal, even as exaggerated as it was this week. It's not right or wrong, it's just the way life is.

Rather randomly, House shows up with a Russian fiancée, Dominika. Where does one find one of these? Did they meet at the hotel? By the end of the episode, he appears to have returned home. He claims to have a pre-nup with her, I can't remember if we've actually seen House's lawyer before. Whoever it is, they sure must be busy. His shenanigans appear to be for the direct purpose of pissing off Cuddy, very overtly so in the case of flying around toy helicopters and parading around his new marriage of convenience. She continues to respond weakly, letting him do whatever he wants - but it was never this bad. Now he's doing what Marshall talked about in this week's How I Met Your Mother - afraid of hurting his feelings after a traumatic breakup, she is treating him as though he were a fragile little flower and he is very conscious of it and pushes her to see how far she will let him go. It takes Wilson ordering her on what to do before she will stand up to him and I have a feeling that she'll just end up caving again in the future.

Ultimately, although House has managed to squeeze all the material goodies he could want from the hospital budget and acquire a live in maid, there's one thing he wants that he does not have and keeps driving further away. His natural instinct to screw with people just proves everything Cuddy said about him was right and he knows it. I wondered the last two weeks if Wilson would directly intervene in House's affairs or if he would start to slip away and it looks to me like it could be the latter. Now he seems more exasperated than ever, and who could blame him? He can storm into his office and make all the dramatic speeches he wants, it hasn't worked in the past and it probably won't work now.

When they found bones in the patient's digestive tract, I shouted right away something along the lines of , "It's because he's a cannibal!" but I only half expected to be right. When he started crying to Masters about the horrible things he had done, well that sealed my suspicions. I wonder, will they follow up on this storyline? Will a confrontation between him and Masters once he is presumably caught result in the conclusion of her arc? Was his crying just a facade to draw her sympathy? On the one hand, he's obviously a manipulative lying bastard, on the other hand he seemed able to sense people's reactions to him, not bothering to butter up Taub at all and already knew he had her round his finger. He talks a lot about God and it was notable that when he was brought in, he had that typical Jesus look with the long hair and beard. Many of the more famous serial killers in American history have professed religious ideals in their "work".Of course, most of them are also masterful liars so it's difficult to separate what's real from what's not.

This was an ok episode. House's antics were ridiculous and got me onto the "this would never fly IRL" train of thought that's so dangerous and distracting when watching TV but Dominika was sufficiently cute to offset that. Even though she probably has her Mafia goon 'cousins' rolling up on the docks to filter off all of House's cash. Chase's speech as he performed the ceremony was awesome. I didn't realize this until after but the serial killer patient played Amber Tamblyn's boyfriend on Joan of Arcadia which offers some background on how natural the scenes between them felt.