Ben is pulled away from a date by a needy Crystal. Linda from Better off Ted and Alonzo are competing again. Roman admits having trouble talking to girls. 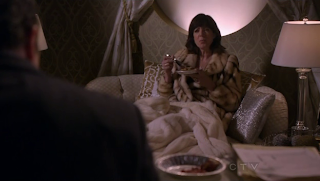 Roman/Heather may not be such a crack pairing if she's actually keeping up contact with psychotic killers. It still doesn't sit right mainly because he's fairly annoying. At least it's a better relationship than Linda from Better off Ted/Alonzo whose entire dynamic seems to revolve around competing to prove who is better at their job. Linda uses her feminine wiles to prove victory in getting the geeky tech moguls to donate money to the center. Way to break cliches.


At least Crystal started clawing her way back into quirky character range. Seems like she got the Sunshine Center from an ex-husband, which makes a lot more sense than her being any kind of actual competent businesswoman. She makes a big show of not wanting to be alone on a date she split with "the love of her life". Really it's just a fun story she can tell herself to make prove to herself how important she is. When it turns out her ex is not at all upset or broken, she promptly leaves.

There was supposed to be some sort of Aesop about needing to build relationships rather than settle for meaningless sex. With the episode focusing on the women it seemed like that's how they tried to approach it but it didn't work at all. Ultimately, it all meant nothing.