Kate gets paranoid about Ben working with his ex, while Connie dates a guy to whom Larry takes an instant disliking. 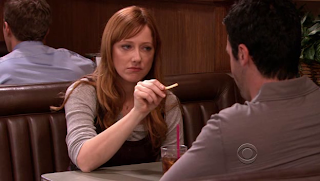 This show continues to be incredibly bland and largely inoffensive which in itself is becoming offensive. The central theme of this episode is trust. Kate's fear of Ben straying is relatable even if she does take it to extremes. Ben himself understands what she is thinking and not saying because if the shoe was on the other foot, he would probably be doing the same. The synchronicity serves them well as a couple, although it does feel somewhat by design.

Connie is obviously being lied to by her doctor boyfriend. I thought for a moment they might try and subvert the theme, but you never saw he and Connie meet, so he obviously wasn't going to turn out to be any great catch. Her reaction when she finds out he is married is pretty much what you'd expect, but had a nice twist on the theme with the ketchup. The surprise this week was Larry who proves his respect for Connie in handling the situation. While they frequently snipe at each other, it's already descended into all good fun territory - Larry has become good friends with Kate and both Larry and Connie trust her judgment enough to freely accept one another as well. When he first finds out, he immediately begins to think of a way to rub it in her face... but then grows up.. just for a bit. For him, it's the point where he chooses the reality of accompanying his friends rather than chasing some fantasy of a woman who he knows nothing about that demonstrates the latent maturity best, and a glimmer of hope for the series that they took a more subtle approach with that final moment. They still need to get rid of his dumb narration though.