Jack (Alec Baldwin) struggles to impress his new bosses, while drafting in Liz (Tina Fey) to help Avery get a new job with NBC. 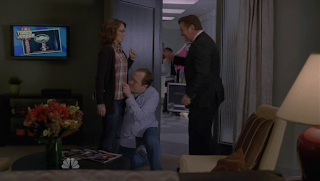 After two fantastic episodes to kick off the new year, it's back to more lightweight fare for media favorite 30 Rock. With Kabletown having completed their takeover of NBC, Jack is scampering around in a panic trying to make sure everyone gives off the right impression. As it turns out, the corporate structure and policies of Kabletown are very different from what he was used to with GE - it's much more of a family, than a hierarchy with employees encouraged to pitch ideas to Jack - cue montage of increasingly terrible ideas, including Kenneth's idea for an optional censorship bar across the TV.

When called upon by his new boss Hank Hooper, Jack has some ideas of his own but none of them seem to fit the bill until he brings up Kenneth's idea, passing it off as his own. It's a perfect fit with Kabletowns ideals but Jack feels guilty for stealing the idea and tries to push Kenneth (Jack McBrayer) to demand something from him in return. However, he's far too nice, leaving Jack frustrated, bewildered and thoroughly lost in an unfamiliar business environment. He ends up admitting the indiscretion to Hank and offers his resignation, but the head man is apparently pleased by Jack's honesty. Maybe it'll work out for him after all!

Liz meanwhile has been sent by Jack to help Avery (Elizabeth Banks) purchase "baby things". As a defacto bodyguard, she also has to ensure that no one finds out that Jack's new wife is pregnant - despite almost being due, it's still under wraps both figuratively and, thanks to a manufactured surge in fashion-ability for wizard cloaks, literally. If she is outed, she will not be able to secure a new job on network news. Her aggressive competition seeking the truth is Cynthia Chao, a rival newscaster of supposedly unknown ethnicity.

An aside about this - I don't want to get into a whole debate about what looks like which race or who should be considered what or why what I'm about to point out is so important, but I'll say this much. Her ethnicity is not a mystery. Her family name is Chao - clearly a Chinese name. As Marlo Stanfield once said, "My name is my name!" Your name defines you and even if everything is stripped away, you'll always have your name. At a forthcoming Japanese arts event, the main speaker is an expert who supposedly comes from a proud samurai tradition. Her surname, presumably through marriage is Solloway, a very specific ancient English name. Sorry, but you are not part of that Samurai family any more. You've clearly chosen your path and it didn't have to be that way - enough women nowadays upon marrying either do not change their name or will hyphenate it - Your name is your name.

Anyway back to the show, Liz claims that she is the one who is pregnant and almost revels in the attention, being interviewed by Cynthia, posing for a (disturbing) photo-shoot, having the staff waiting on her hand and foot. Being 'pregnant' seems to agree with her although we kind of already saw that show. The deception holds out long enough for Avery to win the job and she's able to reveal her baby bump in the end. I will mention the fact that there was a sub-plot with Tracy and Jenna receiving a gift bag from Kabletown which resulted in them fighting over the contents but say no more because it was supremely stupid and further proof that when forced together, they for the weakest link in the show.

The Liz plot thread worked awesomely well, but the episode was dragged down by the lack of entertainment provided in the rest of the episode. I don't really have a lot else to say here. It was mostly just a fluffy serving of inoffensive fun.