The team treats a patient with a perfect memory. House is concerned that Wilson has given up on future relationships and Taub has to retake his pathology exams or face being fired. 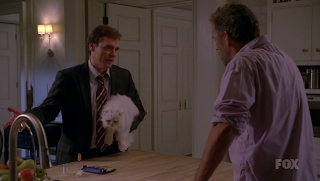 Polite Dissent is an awesome site that details the medical mystery portion of the show with actual terminology way better than I could ever recall. The patient, Nadia, is a waitress who can remember EVERYTHING EVER. That can make her pretty hard to deal with on a personal level as is fully realized when her sister Elena shows up. Because Nadia is able to remember every single misdeed committed against her and apparently is keeping score, she's incapable of the unconditional love normal people are. The only attachment she has is to that memory. Masters (Amber Tamblyn) is intrigued by it and asks incessant questions but one of the initial theories they have (Parkinson's disease) would rob Nadia of that skill which she is very against.

When Elena shows up, her and Nadia argue and Nadia's heart rate shoots up (tachycardia) nixing the theory. House suggests a cardiac test using Elena as a natural trigger which Masters later provokes, and she feels like crap about it naturally. Chase figures out that her kidneys are failing, but Nadia is allergic to dialysis so she'll need a transplant. Masters goes to Elena to ask her, and she agrees - that unconditional love thing coming through. After the surgery as thanks, Nadia approaches Elena and tries to make nice but can't sustain the facade or forgive her for past misdeeds and leaves in tears. Her health problems are not resolved by the transplant but after a lot of medical jargon and wrong guesses, House eventually is able to figure out that it's McLeod's Syndrome. It's incurable, but can be controlled with medication; that medication would ease her obsessive 'score-taking' but also return her memory to normal. Nadia is resistant to that idea as she thinks her photographic memory is the only thing she has in her life that means anything, but seeking a better relationship with her sister, she takes it at the end of the episode.

Meanwhile, Wilson is back! He's finishing up in the clinic with a patient who tells him to give "Sarah" a kiss for her when House walks in. House can't let this pass by without finding out everything he can about "Sarah". A new girlfriend perhaps? Nope, it's a cat. House is worried that Wilson is going to end up a old spinster cat-lady so attempts to sabotage it by convincing Wilson that he's allergic to cats. It doesn't work. He convinces him to go to the bar later for a boys night out and eggs on Wilson as he hooks up with a hot babe. Wilson however doesn't really follow through on it. Listen, he's still sad after his breakup with Libby Sam. He just needs some time, but really, he'll be OK. Stop worrying so much, House!

Taub having failed his pathology exams, is forced by House to pick a tutor from amongst the team as he prepares for the retakes. He picks Foreman, figuring that he doesn't care about anything and will just leave him alone, but Foreman actually seems willing to rise to the challenge. He finds though, that Taub's willingness to study is similar to mine, non-existent. He moves Taub from the hotel room he's been staying in since separating from his wife into his apartment so he can keep a closer eye on him. It doesn't get a lot better though and Taub admits he is scared plain and simple. The first time he took the exams and got the qualification, he got a near perfect score, but whatever he achieves this time around will be an indicator of how far he has fallen in that time - he is very down after the breakup of his marriage. Foreman tries to convince him he can do it but they end up cheating and buying the test questions from some kid.We'll get 'em next time I guess. But the experience has strengthened their friendship, and Foreman asks Taub to stay for good, or at least till he gets back on his feet.

Decent episode, nothing special. The patient was really annoying, but that was the point. I love Amber Tamblyn's mannerisms and facial expressions as Masters, they're just dang adorable. There was a little too much explaining exactly what was troubling Wilson and Taub. It maybe could've been subtler, a little more inferred. Of course, because the show has gone on for so long it's possible to take it for granted and nitpick but never doubt that this is one of the best written shows out there. The people making it really know what they're doing.