Troy and Abed take the same girl to the Valentine's Ball while Britta takes a lesbian friend. Jeff gives it a miss in favor of staying home and watching soccer but Chang interferes with that plan. 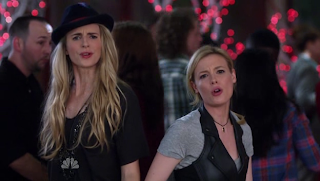 
In a special Valentine's episode of the show, the flow is again a little off but still "Community" enough to be a lot of fun.Troy and Abed both have their eye on a cute librarian but can't decide which of them should get the first crack of the whip. Asking Jeff for advice doesn't work out too well so instead they both approach her at the same time asking her to do the choosing. She doesn't know either of them beyond their random shouting of "BOOKS!" in their prior desperate attempts to get her to notice them. Finding their double act adorable however, she agrees to go with both of them to the Greendale's Valentine's Ball and choose there.

Britta has made a new friend, a lesbian named Paige as she proudly explains to the group. No one, except perhaps Annie seems as surprised as she is hoping. Pierce, who has frequently accused Britta of being a lesbian in the past, even has a prepared statement on the matter. After delivering it, he moonwalks out of the room apparently high on pain medication he's been taking for his legs. Jeff has an argument with the rest of the group over staging an intervention for Pierce and the merits or lack thereof of the Barenaked Ladies and storms out. He's accosted by Professor Duncan (John Oliver) who wants to watch the Man Utd vs Liverpool match on Jeff's giant plasma TV. Jeff says sure why not, just so he can avoid joining his friends at the ball later on, but Chang overhears their conversation and the gears begin to turn in his head.

He turns up at Jeff's apartment later, ostensibly to watch the game with Jeff and Duncan. He weasels his way in by promising to order a pizza, but covertly invites everyone on campus to a rave to be hosted by Jeff. A large mass of students including Starburns and Magnitude shows up to get the party started and after getting over his initial shock, Jeff gets into it. However, something odd is going on with Chang - he's somehow managed to move in all of his belongings, using the rave as a cover! Seems he has been thrown out by his wife and has no one else to turn to. Unimpressed, Jeff tosses him and everyone else out.

At the ball, Troy and Abed take turns trying to impress the librarian - the rivalry never gets less than friendly though, they are brothers after all. She chooses Troy, finding Abed somewhat kooky - he did talk about the Saw movies for 2 hours. Troy, upon hearing her reasons however is appalled that she finds his friend weird and dumps her. He goes to find Abed and vows that they will find someone good enough for them both. Awww. While Pierce is off in a corner imagining a miniature Andy Dick dancing with him in a drug induced haze, Britta has brought Paige as her "date" to the dance.

Earlier on, Annie had found out that Paige wasn't actually a lesbian - in fact it turns out she thought Britta was one, and thought it was cool that she was friends with a lesbian. Seems that they each assumed the other was one and were too politically correct to ask to make sure. Anyway, at the dance, other people are giving them weird looks. Striving to break barriers, they perform a raunchy dance together which eventually ends in a passionate awkward kiss. They each exclaim how they'd never done that before at which point the penny drops. Paige admits she doesn't actually like Britta and was only hanging out with her because she thought she was gay and leaves. Annie comforts Britta and apparently is easily suggestible - when someone yells "Kiss her" she leans in.

Back at Jeff's, he starts wishing he was with all his other friends, unsurprisingly missing them. Cleaning up after the party, he finds Chang sleeping in the trash chute and carries him back to his lounge. He then sends a syrupy sweet text to everyone about how much he loves them all. Awww-uuurrgh. Pierce doesn't get the message, passed out and sprawled all over a park bench. Looks like (more) dark times ahead for him.

I could've done without the Aesop at the end, haven't we already established that Jeff as much as he tries to push everyone away does really love them all? The Pierce storyline was jarring and didn't really seem to have a natural fit with the rest of the episode. Chang needs some layers, personally I'm tired of the Asian butt monkey stereotype that seems to be popping up everywhere, with Ken Jeong and C.S. Lee leading the charge with those roles. Shirley didn't have anything to do which is just as well. Duncan is a Liverpool fan - destined to be a loser forever. The other two storylines were pretty good. This wasn't as good as last weeks episode, but was similar in that it had some good jokes but didn't all fit together that well - I'm willing to give it the benefit of the doubt with a strong back catalogue.